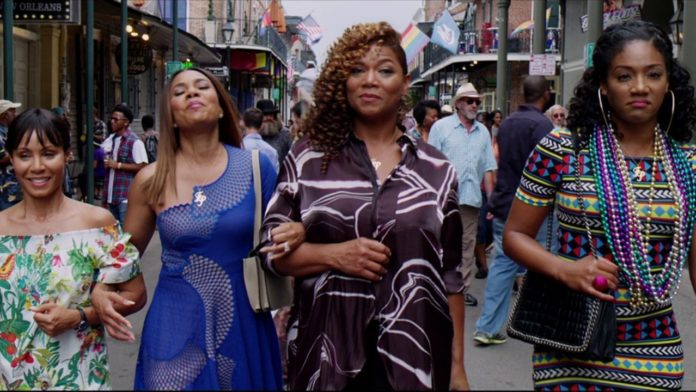 Jada Pinkett Smith and Queen Latifah will reunite on the silver screen July 21 in their first film together in 21 years.

In “Girls Trip,” the duo, along with actresses Regina Hall and Tiffany Haddish, play four friends from college who reconnect over a girls’ weekend in New Orleans at the annual Essence Festival. There, sisterhoods are rekindled, wild sides are rediscovered, and there’s enough dancing, drinking, brawling and romancing to make the Big Easy blush.

For Pinkett Smith, it was a chance to “cut loose” from some of the roles Black women have been relegated to on screen.

“I think we’re getting to a place where we’re afforded the opportunity to kind of cut loose and see all the wonderful colors of who we are,” the actress said. “In this film we are flawed, funny, vulnerable and out of our minds! We go way over the top, just to remind people that it’s comedy.”

Producer Will Packer compared the R-rated comic romp to “The Hangover” and “Bridesmaids.”

“I thought it would be fun to see a film in that vein, with chocolate girls,” he said.

Added director Malcolm Lee (“The Best Man”), “This film is an opportunity for Black women to see themselves the way they see themselves and not the way other people see them and not in some trumped-up reality show.

“Setting it at Essence was huge,” Lee said regarding the effort to depict Black woman in a way that hasn’t been done. “In thinking about what the movie was going to entail, I saw so many different Black women from all different walks in life… I felt like that’s a great thing to put on film.”

“There’s a complexity to the imagery of Black women,” Packer said. “What happens is if you don’t have a lot of images, then the few that you have [must] represent the whole of what black women are.”

He added that “Black women, historically in media, have been either over-sexualized, hyper-angry, or super-saintly. Those aren’t real people, those are caricatures. The opportunity to show real people played brilliantly the cast was important.”

For Latifah, it was a chance to act again with her longtime friend, Pinkett Smith. Although they have partnered behind the scenes over the years, including on Latifah’s now-cancelled daytime talk show, they haven’t been on screen since co-starring in 1996’s “Set It Off.”

“‘Are you doing it? If you do it, then I’ll do it,'” Latifah recalled the two of them going back and forth.

The 47-year-old actress also reminisced about her favorite girls’ trip.

“My best girls’ trip in my 20s was such a turn up, but I think my girls are about ready for another one of those – minus a lot of real debauchery we might have done in our 20s,” she said.

“We’re all like adults and in relationships and kids like that. So I don’t think we’d get as wild as we did back then but we’re still capable of getting wild.”

in the comedy film “Keanu.”