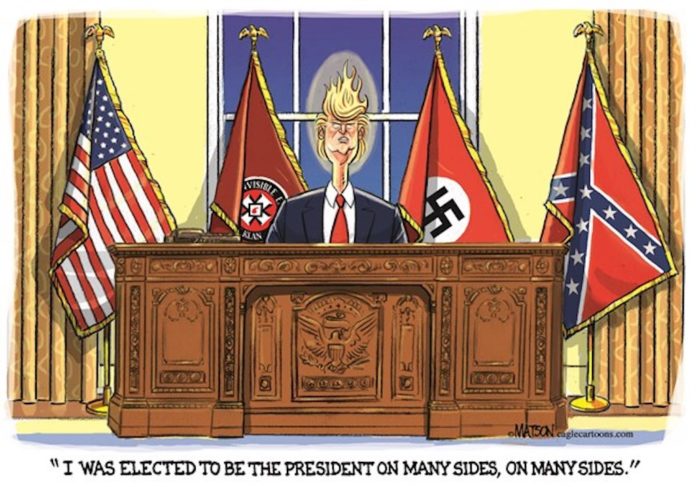 They marched with lit torches, yelling Nazi slogans, looking for trouble. They provoked violence, terrorized a city, and took the life of Heather Heyer and injured many more. In the reaction to those horrors, character is revealed.

For Heather Heyer, the neo-Nazi assault revealed her passion for justice. She died standing for what she believed in, and her sacrifice helps to redeem an America that is far better than the haters.

She joined a peaceful demonstration against the neo-Nazis, standing with African- Americans and people of conscience unwilling to be intimidated by the mob. She was crossing an intersection when a 20-year-old man plowed his car into the peaceful demonstrators and took her life, injuring 19 others.

She now joins the blessed martyrs of America’s long struggle for equal rights. She stands with other angels who sacrificed their lives: Viola Liuzzo in Selma, Ala. in 1965; James Chaney, Andrew Goodman and Michael Schwerner near Philadelphia, Miss. in 1964; the four little girls –Addie Mae Collins, Cynthia Wesley, Carole Robinson and Denise McNair – blown up in the Birmingham, Ala. church bombing in 1963.

Donald Trump’s reaction to Charlottesville will be etched in infamy. At first he refused to condemn the neo-Nazis and white nationalists, choosing only to decry the “egregious display of hatred, bigotry and violence on many sides.”

Some Republicans showed they know better. Conservative Sen. Orrin Hatch tweeted simply, “My brother didn’t give his life fighting Hitler for Nazi ideas to go unchallenged here at home.” Sen. Marco Rubio spoke forcefully against the haters. Some Republicans even rebuked the president for his failure.

Decrying racism is necessary. Words are important, but actions are needed. Dr. Martin Luther King always warned against being satisfied with words: “Loose and easy language about equality, resonant resolutions about brotherhood fall pleasantly on the ear, but for the Negro, there is a credibility gap he cannot overlook. He remembers that with each modest advance the white population promptly raises the argument that the Negro has come far enough. Each step forward accents an ever-present tendency to backlash.”

Denouncing hatred is important, but we need to focus on who is prepared to act.

Gov. Terry McAuliffe of Virginia denounced the haters that terrorized Charlottesville, and did so with a record of action. As governor of a Southern state, he pushed for voting rights reforms. He called on his legislature to accept the expansion of Medicaid under Obamacare that would have provided health care to poor working people of all races. He personally signed some 200,000 clemency grants of those who had served their sentences so that they could regain the right to vote and be reintegrated into the political community. His denunciation was important; his actions even more so.

We applaud Republicans who call out the neo-Nazis and the Klansmen. But the measure of their sincerity is how they act. The Trump Department of Justice, under former Alabama Sen. Jefferson Beauregard Sessions, has moved consistently to reverse and weaken civil rights.

He’s turned away from reforming discriminatory practices of police departments, even as Trump has celebrated police brutality. He’s turned civil rights laws on their head, gearing up to investigate university affirmative action programs that allegedly discriminate against whites. He’s backed off enforcement of the Voting Rights Act, which he has called “intrusive,” opening the door to more efforts to suppress the vote.

Trump has pushed for a selective ban on Muslim travelers to the U.S., and he continues to prey on immigrants and posture on his “wall.” The Republican Congress, with its push to strip millions of health insurance to pay for tax breaks for millionaires, and its budget plans to cut top-end taxes while gutting funding for education and for food and housing programs that support the most vulnerable, only adds to our entrenched injustice. The Republicans’ actions speak much louder than their words.

America has come a long way from the horrors of slavery and segregation. We are a better people and a better country for that struggle. Yet, as Charlottesville revealed once more, hatred and racism still fester. Unprincipled politicians can still play on race and intolerance for their own purposes. Violent hate groups are literally on the march.

These must be denounced, even as we celebrate Heather Heyer and the forces of conscience. We must also act. A good response to Charlottesville would be a massive voting coalition to drive out the forces of division and push for a new era of reform. We must act, change the institutionalization of bias, protect and extend the right to vote, and fight to ensure equal justice and opportunity for all.