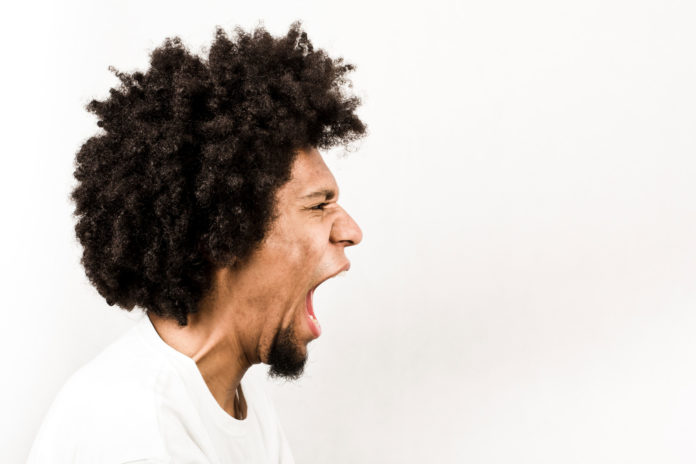 I was first called an angry black man while a student in college.

We were in African-American History, and our professor, a white member of Omega Psi Phi (I say this only because in all my years of Greekdom, I have never come across another old-head Omega who was white; I can only imagine what ol’ boy had to endure while pledging during the height of the civil rights movement), was leading a class discussion on the beef between W.E.B. Du Bois and Booker T. Washington.

Many of my classmates were sympathetic to Washington’s approach to black liberation, but I held firm in my presupposition that centering whiteness was a poison pill for black liberation. To me, the only way for black folks to truly be free was to decenter whiteness in our thinking and cultural expressions.

“Damn you, radical,” said my classmate and soror. “You an angry black man fo’ real.”

It was my first time being called angry and a radical, but it would not be my last.

Initially I rebuffed the idea of being a radical. To me, a radical deviated from the norm to such a degree that one was considered dangerous or illogical. I wasn’t like my uncle who used phrases like “the white devil.” I did not agree with folks who thought we needed a political revolution or a separate nation-state. Hell, I didn’t even like dashikis, and at the time, I didn’t understand what the big deal was with black women embracing their natural hair.

I merely thought that black folks should love themselves and their culture. I did not think that was a radical idea. It felt like common sense. It wasn’t until I read people like James Baldwin, Frantz Fanon, bell hooks and Angela Davis. These thinkers were clear in their deconstruction of white supremacy and did not write with an eye for how white folks might feel about what they had to say. I’d spent most of my life worrying if white folks would like me. I pulled my pants up wanting white employers to look favorably upon me. I spoke in a way meant to make white folks see me as intelligent. My whole life was spent centering whiteness.

As I finished Frantz Fanon’s Black Skin, White Masks, I sat back in my chair and looked out the window. It was almost as if scales had fallen from my eyes and now I could see clearly. America had taught me to be ashamed of my blackness. I’d bought into the lie of white supremacy, and I had unwittingly arranged my life around the white gaze. That day I saw for the first time the violence commonly visited upon people of color in this country.

In America, to forcefully move indigenous people from one part of the country to another in the name of Manifest Destiny is the norm. To use enslaved Africans as an unpaid labor force was not considered extraordinary—it was banal. The norm in this country is the objectification of women in general and the hypersexualization of black women, including black girls, in particular. Normal in this country is black social death and the African in America’s alienation from self, culture and history. These things are normal in the so-called land of the free, and if those are the norms, then I was happy to accept my role as a radical. I was even happier to be called angry.

Unlike white male Trump supporters, who are angered by their perceived loss of privilege, black anger in response to the pervasive nature of white supremacy is logical.

Only a person comfortable with injustice would look at the condition of black people in this country and not be angered. Almost daily, we are confronted with new hashtags that memorialize black women and men who have been murdered by the police. Black children disproportionately attend schools that are underfunded and overcrowded, and black men and women are disproportionately ensnared by the criminal-justice system.

Yes, I am angry about the conditions of black, brown and red people in this country. Yes, I do think that the norms of oppression and marginalization need to change.

I am a radical, and I am angry. I am all of these things because I unapologetically love my blackness and yours.

Lawrence Ware is a progressive writer in a conservative state. A frequent contributor to Counterpunch and Dissent magazine, he is also a contributing editor of NewBlackMan (in Exile) and the Democratic Left. He has been featured in the New York Times and discussed race and politics on HuffPost Live, NPR and Public Radio International. Ware’s book on the life and thought of C.L.R. James will be published by Verso Books in the fall of 2017. Follow him on Twitter.