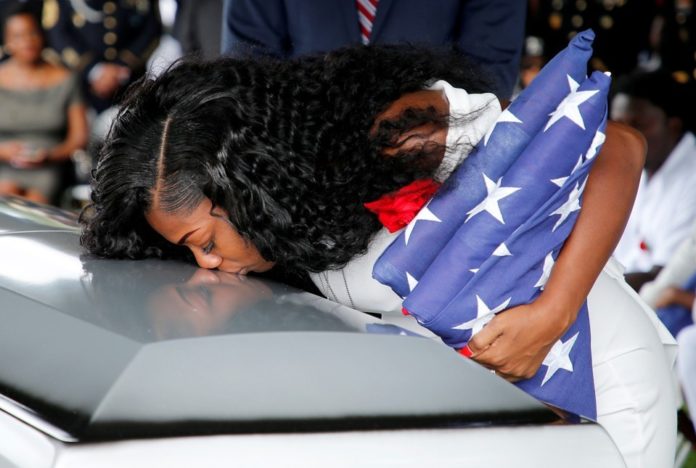 In the national story that only continues to spiral, Myeshia Johnson, the grieving widow of Sgt. La David Johnson, who was killed in an ambush in Niger, is now being dragged on the Internet over her recent interview on Good Morning America.

The interview, where Myeshia Johnson expressed her outrage at President Donald Trumpfor a comment he made during a condolence call, was published by GMA’s Facebook pageand subsequently resulted in a flurry of criticisms and insults.

“She’s a new widow, and that breaks my heart, but I hate she’s turning her husband’s death into something political. She seems like she’s looking to get famous,” wrote one Facebook user. Another writes, “Sad she lost her husband, and their children will grow up without their daddy…but is it me or did all her answer[s] seemed coached and searching hard.”

“…this woman is milking her husbands death for all she can. We dont see any other widow doing this,” another added, while one commenter wrote:

What a disgusting thing for this woman to do. I pray for this woman to admit that she had her arm twisted by lowlife Democrat politicians who will soon throw her out like yesterday’s garbage. Lady, your acting stinks. By this time next month, Representative Frederica Wilson will have completely forgotten her name, as that disgusting individual will have milked the last bit of publicity out of the story.

The death of La David Johnson continues to be a political debate that continues to divide the country, particularly between supporters of Trump and those defending Congresswoman Frederica Wilson, a mentor and friend of the Johnson family, who first publicized Trump’s comment that La David Johnson “knew what he signed up for.”

Trump and his administration has continued to deny Wilson’s claims.

But not everyone had harsh words for Myeshia Johnson. One Facebook user slammed commenters who felt the need to drag a grieving widow:

Shame on each and every one of you for doubting this woman, for condemning GMA, and for spewing hatred, racist words. I wonder how many of you would feel the same if this was a white woman who lost her husband and felt disrespected by President Obama…y’all would be jumping his case and not the woman. Funny(not funny at all) how skin color of the parties involved apparently changes everything. Check yourselves.

It is not for any one of us to decide if this widow felt disrespected or not. A simple apology or acknowledgement from the POTUS that maybe his words were taken out of context could have prevented this whole debacle. Having others lie in attempts to make someone else’s story appear to be false is proof of guilt in my book. My opinion won’t change no matter how many names you call me or insults you throw my way.