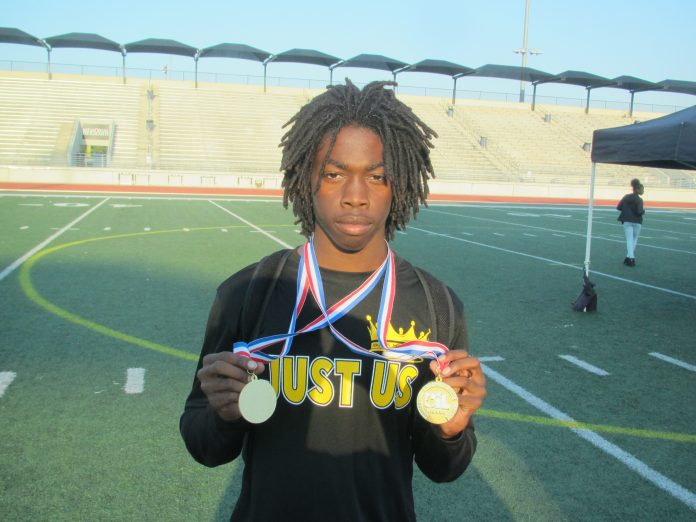 When Fort Bend Marshall High School head boys’ track and field coach Lloyd Banks was searching for a key component among his options to supply points in the march for a state championship, he didn’t have to look far.

Biding his time among a strong contingent of sprinters was sophomore Bryson Stubblefield, who answered the call in a big way despite not being on the radar screen in the season’s early stages.

“Honestly, as a coach I’m not ashamed to say that when we first sat down and discussed the competition in our area and what we might expect moving forward to the district, regional and state meets, I didn’t initially have Bryson on the board,” Banks said.

“He got it done today. It started with a phenomenal [opening] leg on the 4×100 relay. Then it continued in the open 100-meter dash. I’m not surprised, I’m proud of him,” Banks said.

Marshall opened the running finals at the Region III-5A/6A meet at Humble’s Turner Stadium with a gold medal time of 40.72 seconds to best both Humble High School (41.36) and Port Arthur Memorial (41.39).

Stubblefield’s banner day continued with a first-place finish in the Class 5A 100-meter dash when he soared across the finish line in 10.74 seconds. Z’Antyler Foster-Hooks of Corsicana (10.85) finished second and Crosby’s Craig Williams (10.87) placed third.

“I didn’t really know what to expect coming into the meet,” Stubblefield said. “I just made sure I came in focused, ran my races with good form and came away with the gold.”

In the Class 5A boys’ mile relay, Marshall’s unit of Achane, King, Thomas and Dominick Houston-Shepard crossed the finish line in a gold medal winning time of 3:15.27. College Station (3:16.15) and Shadow Creek (3:19.57) placed second and third.

Houston-Shepard swept both hurdle races with times of 13.86 seconds and 37.09 seconds in the 110- and 300-meter hurdles, respectively. Teammate Matthias Petterway (37.55) won a bronze medal in the 300-meter hurdles.

Stubblefield is a believer in self-motivation.

“That’s when I knew I could win regionals and go to the state meet,” he said.

Stubblefield was 6 years old when he first began running track and he continues to reach new milestones as a 10thgrader.