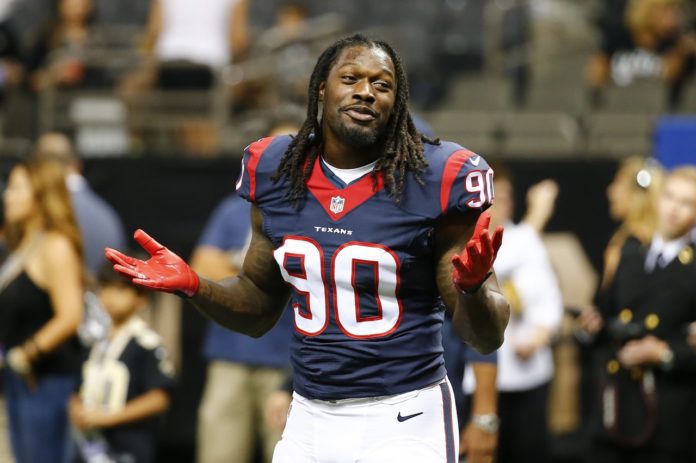 As the Texans prepare to kick off the 2017 season, questions abound on the offensive side of the ball. Will the talent on the offensive line come together? Where are the playmakers at wide receiver? Can quarterback Tom Savage stay healthy and guide this team? When does Deshaun Watson takeover as QB?

Whatever the answers to those questions are, one thing we know for certain – the Texans have an outstanding defense.

The Texans led the NFL in total defense in 2016 and that was without the services of three-time NFL Defensive Player of the Year J.J. Watt. Former defensive coordinator Romeo Crennel has been bumped up to assistant head coach/defense. Former linebacker coach Mike Vrabel has been elevated to defensive coordinator. Will we see a different defense? Don’t count on it.

“It’s been a seamless transition,” head coach Bill O’Brien said.” Having [Crennel] here still is a big help, but Mike’s doing a good job. Like I said in the offseason, he’s ready for this. He brings a great energy and passion and leadership to the field and knowledge of our scheme. Players have a lot of respect for him.”

“He brings enthusiasm every day and we just kind of feed off of his energy,” Jackson said. “He’s been in the situations that we’ve been in and some big-time ball games, so we’re definitely going to follow him. He’s a great leader for us.”

Jackson discussed how the defensive unit can get even better in 2017.

“One of the things we talked about as soon as we got back for OTAs is creating turnovers,” Jackson said. “We feel like as a defensive unit, that’s our job, to create turnovers. We definitely want to be the best unit in football.”

In the secondary the Texans will have to find replacements for veteran cornerback A.J. Bouye and safety Quintin Demps, both of whom were major cogs in the secondary.

Another factor that gives rise to high expectations is the return of defensive end Watt to an already potent unit.

“[Watt] plays a big role for this team,” line mate Jadeveon Clowney said. “He’s a great leader. We need him and all the guys healthy.”

The thought of a defense that includes Watt and Clowney is something that excites linebacker Whitney Mercilus.

“I think it’s awesome,” Mercilus said. “We have lot of guys out there who are very versatile. We can give a whole lot of different matchups, load one side or have guys dropping, rushing, things like that. I think it’s going to be special but we’ve got to be able to do it again this year.”

Watt likes what he sees and the possibilities should give opposing offenses fits.

“I think it’s special for all of us,” Watt said. “You have some phenomenal pass rushing ability out there. You’ve got Jadeveon, you’ve got Whitney, and it’s going to be great. Just to see the talent that we have and the ability to put it on the field at the same time and to come from different angles, it’s going to be really special.”

The Texans’ first regular season game is against the Jacksonville Jaguars on Sept. 10 at noon.