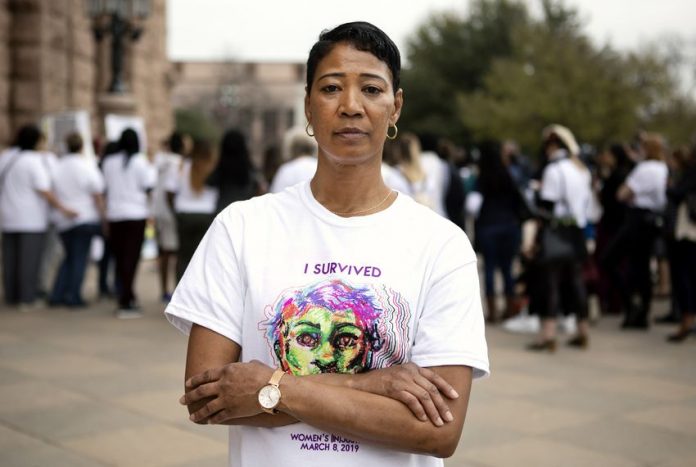 Evelyn Fulbright had a painful tumor on her uterus during the two years she spent in prison. It caused her to bleed during most of the month, so she’d often wear three pads at a time to keep herself clean. Usually, it wasn’t enough.

She said the pads in the prison were too thin, and the tampons had uncomfortable cardboard applicators. There were many times that she bled through her uniform, which is white in facilities operated by the Texas Department of Criminal Justice.

When that happened, she said she’d try and wash it out her own in the sink. She said she was told it was against the rules, but she said many women took the chance anyway.

“It was painful. I was bleeding all the time,” said Fulbright, who was sentenced to prison in 2006 when she was 41 years old. She said she had a severe cocaine addiction and was originally arrested for a drug offense in 2001.

Many women who have spent time in the state’s prisons have similar stories. In a survey of over 400 incarcerated women conducted by the Texas Criminal Justice Coalition last year, more than half said they didn’t have access to enough pads and tampons each month, and that the quality of products was poor.

It’s just one of many issues that make it difficult to be a woman in prison, and one of many that advocates and lawmakers are hoping to address this legislative session.

In the run-up to the session, the House Committee on Corrections was asked to study treatment options and conditions of the state’s incarcerated women. The committee’s report has led to a group of 13 bills aimed at helping women in the state’s criminal justice system, addressing issues including trauma history, feminine hygiene, vocational and educational programs, parents in the justice system and the treatment of pregnant women who are incarcerated.

Earlier this month, to coincide with International Women’s Day, a group of lawmakers and formerly incarcerated women marched from the Travis County Jail to the Capitol to share their stories with lawmakers and discuss some of the proposed legislation. And last week, some of the bills began moving forward in the House.

Last year, incarcerated women made up just over 8 percent of the roughly 145,000 offenders in TDCJ facilities, according to TDCJ data. And 64 percent of women in the state’s corrections system are there for nonviolent offenses, according to the House Committee on Corrections.

“There are expectations in free society of women. It’s important that TDCJ, in the rehabilitation and eventual reintegration, they focus on that and on promoting, facilitating the dignity of women and the health of women” said Rep. James White, R-Hillster, who chairs the House Committee on Corrections.

White authored five bills this session that he said could help justice-involved women. One is House Bill 650, a comprehensive bill which he said is meant to provide “dignity and positive womanhood” to incarcerated women. The bill has bipartisan support from four co-authors.

Its proposals include adding a requirement that the department make certain feminine hygiene products available to inmates.

The department already provides 24 pads and six tampons to women each month, said Jeremy Desel, director of communications at TDCJ. He said there is no rule in TDCJ facilities that prohibits inmates from washing their own uniforms if they bleed through, and that additional feminine hygiene products are available if women request them, or can be purchased at the commissary.

He said a team of female leadership within the department recently reviewed the feminine hygiene products provided, and aside from adding panty liners to the list of items given out, the team determined the quality of the products was “satisfactory.”

Lindsey Linder, a senior policy attorney with the Texas Criminal Justice Coalition, said those are the “absolute minimum acceptable standards” for women.

“If you only have access to a certain number of products, then you’re waiting until you absolutely have to change them,” Linder said. “That’s a medical issue. It can cause yeast infections, and if you’re using tampons and you’re waiting to take them out because you know you only have a certain number, then you’re looking at toxic shock syndrome risk. It’s just not a good health care policy.”

“It messes with you”

For the small portion of woman inmates who are pregnant, serving time in Texas can be especially difficult. From 2010 to 2016, about 200 women gave birth while incarcerated in TDCJ facilities each year, according to the Texas Criminal Justice Coalition.

Because of legislative changes made in 2009, TDCJ facilities are prohibited from shackling women during labor and while they are recovering from delivery. But they can still be shackled at any other time. White’s HB 650 would prevent shackling at any time during a woman’s pregnancy.

Angelica Zaragoza served two different stints in prison between 2003 and 2016 for drug, theft and prostitution offenses. When she was sent to prison the first time in 2003, she was pregnant with her second child and gave birth while incarcerated. It was before the law had changed, so she said she was shackled by her ankle during labor.

But she said she was shackled other times, too, like when she went to doctor’s appointments or was transferred to the prison unit near a hospital in Galveston operated by the University of Texas Medical Branch, where many pregnant inmates give birth.

“How is a woman supposed to keep her balance and everything else? It’s difficult. The [shackles] hurt, you’re swollen. It’s inhumane, really,” Zaragoza said.

Desel said in TDCJ facilities today, pregnant women are only shackled during labor if they are determined to be a risk to themselves or their children. He said in the last five years, TDCJ has not used restraints during any deliveries, but that some restraints are used when women are transferred between units.

“Leg restraints, restraint belts, and transport chains are not used on pregnant offenders due to the increased risk of a forward fall,” Desel said in an email. “As is standard security protocol for all transports, hand restraints are used and are placed in front of the body to ensure safety for the offender and the unborn child.”

But Linder said even hand restraints can be dangerous for women, especially toward the end of a pregnancy, when women are prone to losing their balance.

Zaragoza said of her four children, her pregnancy in TDCJ was the worst. She said when she was bleeding in the days after she gave birth, the pads weren’t enough — there were a few times she said she resorted to buying T-shirts from the commissary and rolling them up in her underwear.

But she said her separation from her daughter was especially painful. After she gave birth, she said she only held daughter for 15 minutes before she was taken away.

“There was times after I had my baby that I swear I was going crazy. I would wake up at two o’clock in the morning just hearing a baby crying,” Zaragoza said through tears. It was over 15 years ago, but she still gets emotional talking about it.

“It messes with you in so many ways,” she said.

Desel said there is no set standard for how long a woman remains with her newborn after giving birth. He said each case is different, but a mother’s time in the hospital is usually limited to the medical discharge of her child.

White’s HB 650 proposes requiring women to remain with their infants for 72 hours after giving birth and prohibiting TDCJ from placing women in a unit by themselves after delivery. It would also require pregnant inmates to receive classes on parenting, prenatal care and hygiene, and the medical and mental health care of children.

Currently, TDCJ operates some programs geared specifically toward pregnant women and giving women more time with their newborn. Best for Baby is a peer education program which teaches women child development and parenting skills, the Love Me Tender postpartum program allows women to visit and feed their newborn for two weeks after childbirth, and the Baby and Mother Bonding Initiative, which launched in 2010, allows women to live with their newborn in a residential facility for as long as a year after childbirth.

Desel said most pregnant inmates get to participate in one of these programs.

In Texas, more than 10,000 — or 81 percent — of incarcerated women are mothers, according to the Texas Criminal Justice Coalition.

Rep. Senfronia Thompson, D-Houston, filed HB 1389, which is co-authored by White. The bill would allow judges to sentence defendants who are primary caretakers to community supervision or deferred adjudication, a type of probation that allows a conviction to be dropped if an individual completes the program. Similarly, HB 1374, filed by Rep. Ana Hernandez, D-Houston, would create a grant program for local departments that create pretrial diversion programs, which divert defendants from traditional criminal justice processing and provide rehabilitative treatment to offenders, specifically for defendants who are primary caretakers.

Support in the House

Advocates and lawmakers are hopeful to get some of the legislation through the Legislature this session. Earlier this month, the House Committee on Corrections heard public testimony from advocates and formerly incarcerated women on a number of bills related to women in prison.

The legislation was well-received by the committee throughout the hearing. Lawmakers paid special attention to feminine hygiene products and the experiences of incarcerated women and the effects on their children. Of over a dozen people who testified, the majority were in favor of the bills.

Manny Rodriguez, deputy director at the TDCJ Community Justice Assistance Division, told lawmakers that local communities can already apply for TDCJ grants for pretrial programs tailored to any population. He said $6.3 million was allocated pretrial programs in 2017. Of 120 applicants, the department has grated funding to 29 programs.

But advocates testified that more could be done to encourage programming for parents in the justice system.

Michelle Ramirez works with Youth Rise Texas, an organization that works with youth whose parents have been incarcerated, detained or deported. She testified in support of the primary caretaker’s bill and said losing a parent to incarceration can have damaging mental health and behavioral impacts on children.

She said the effects of parental incarceration for children — from changing schools, being put in the care of a new guardian, losing financial and emotional support or being separated from their siblings — qualifies parental incarceration for what is known as an “adverse childhood experience,” a traumatic event that can have long-term effects on mental health and behavior.

“Losing a parent suddenly, for any reason, triggers a cycle a grief. It’s not solely a loss, but a traumatic experience that leaves long-term corrosive impacts,” Ramirez said. “Parental incarceration is not just a sentence for parents, but for their children as well.”

On Thursday, lawmakers on the House Committee on Corrections unanimously approved White’s comprehensive bill, SB 650, and Thompson’s HB 1389, which addresses community supervision for sole caretakers. Those bills will now head to the full House for approval. But they’ll also need to win the support of the Senate, where only one bill has been filed relating to the state’s incarcerated women.

That legislation, Senate Bill 1846, was filed last week by Sen. Borris Miles, D-Houston. It’s less aggressive than other bills advocates have focused on, and would prevent TDCJ from shackling pregnant women only after the first trimester and while the woman is recovering from delivery.

White said because of the testimony they heard prior to the 2019 session, the committee is serious about addressing the issues facing incarcerated women.

“When we see these trends, the House Corrections Committee, we’re noted for dealing with tough issues that have serious implications on the future. We’re going to address these tough issues,” White said.