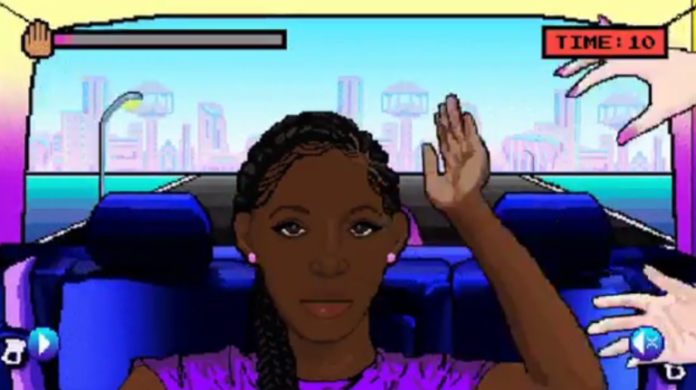 If you’ve never had a stranger try to touch your hair without permission, you’re lucky. You’re also probably not a black woman.

A new video game will give you a taste of how frustrating the experience can be.

Creator Momo Pixel designed the game after she was tired of people making unwanted touches of her hair. And other black women are equally tired of undesired touching, which is why the game, released on Wednesday, has gone viral.

It’s a conversation that keeps happening, although black women have repeatedly said, “Don’t touch my hair.” The message has been relayed in the news, in entertainment media and now in video games. Pixel says the message needed to be shared once again “so we don’t have to keep having this conversation.”

She remembers trying to explain this phenomenon to her boss, who’s white. Pixel is an art director and pixel designer for Wieden+Kennedy in Portland. Her boss tried to imagine what she and other black women experience when people touch their hair without warning.

“He was dodging and ducking. He looked so silly,” Pixel said. She mumbled to herself, “This would make a hilarious game.” And the idea for her video game “Hair Nah” was born.

The title is a play on the phrase “hell nah (no).”

Gamers are taken on a journey in this game. Literally. There’s a choice of going to Osaka, Japan; Havana, Cuba; or the Santa Monica Pier in Santa Monica, California. You can even craft your own black woman avatar, choosing the skin color and hair style, so you’re truly in character for this experience.

As you make your way to the airport to catch your flight, you must swat away the many white hands that suddenly pop out of every direction to touch your avatar’s hair. A narrator avatar, based on Pixel, guides you along with encouraging messages, reminding you that you’re a black girl who rocks. But just catching flights and not feelings is difficult in this game.

Pixel says she wants people to know “how much of an invasion of privacy and personal space this is.” She admits that she made the game difficult because she wanted to create a sense of anxiety, since that’s what a “hair nah” moment induces.

One of the worst memories she has of a “hair nah” moment was when she was checking out at a grocery store. The cashier reached over the conveyor belt and grabbed her braids. This ironically happened during the time she was designing the game.

“It felt like getting molested, because she was caressing them,” Pixel said. “Even thinking about it now, I just want to throw up. I was uncomfortable.”

Pixel, who’s been wearing her hair in vibrant, multi-colored styles since 2011, says it happens “abundantly” in Portland, which she describes as a very white place. “I’ve lived a lot of places but people touch my hair here more than anywhere,” she said. “I remember being mad all the time. I used to just hate walking outside because [I] knew someone was going to invade [my] space.”

That feeling is what she wanted to convey in her game. If you reach your destination in the game, you’re congratulated and left with a reminder that, although the game is over, “this is an issue black women face daily. So a note to those who do it, ‘stop that sh*t.'”

But she says it happens to black men, too, with the hair on their head and their face. Pixel plans to make a version for black men.

Her future plans also include creating a “hair nah” app and clothing line based on the game with an ’80s aesthetic.

“Sometimes I just have to do it for the culture,” Pixel said.