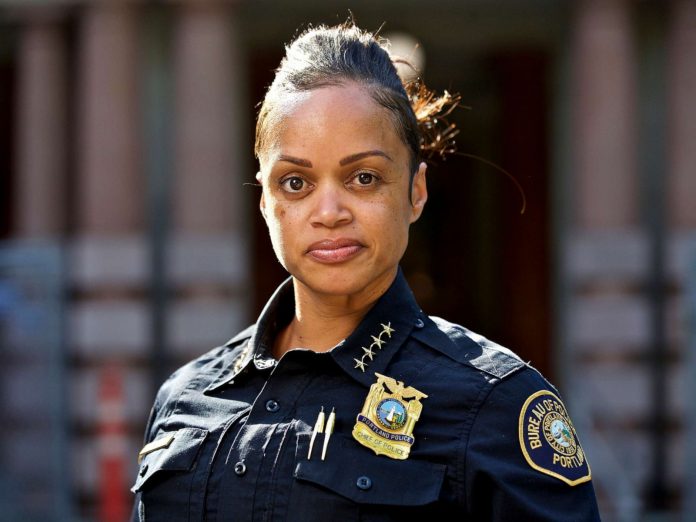 On Dec. 30, after four months of confidential interviews with about 30 candidates, the City of Philadelphia, through Mayor Jim Kenney, publicly announced Danielle Outlaw, the former first Black female police chief of Portland, Oregon, who served there from 2017-2019, was selected as Philly’s new — and first Black female — police commissioner.
Prior to her leadership in Portland, Outlaw worked in the Oakland, California, Police Department from 1998-2017 as deputy chief, internal affairs captain, watch commander, Inspector General official, community services liaison, and patrol officer.

1. Powerful Role Model — She credits Rosa Parks as a cultural mentor because Parks’ “one action influenced others to perform many.”

2. Brains and Brawn — She holds an MBA, having earned it in 2012 from Pepperdine University’s Graziadio Business School.

3. Papa Was Proud (Eventually) — She admits that her father didn’t want her to become a police officer. In fact, while at the Oakland police academy’s family day event, he embarrassed her by telling the attendees that it was a “waste of her degree.” But eventually, he not only accepted it but was proud of it and proud of her as he bragged to neighbors.

4. Tatted Up, Kinda/Sorta — She has three tattoos on her arms. The first is a quote from Shakespeare’s “A Midsummer Night’s Dream,” which states, “Though she be little, she is fierce.” (By the way, she’s five feet, four inches tall.) The second is a Taoist tribal band symbol representing divine blessings and eternal life. And the third is a treble clef, which pertained to her former aspirations of becoming a professional singer. (By the way, word on the street is that she can really sing — I mean saaaang!)

5. Treatment Over Punishment — She has made it clear that, in regard to drug abuse problems, she doesn’t “believe that the first responders [meaning the police] should be dealing with a lot of these issues because they are not crimes.”

6. Protecting Immigrants — She supports sanctuary cities and often emphasized in Portland that “We do not enforce civil immigration laws.”

7. Global Consciousness — She is a member of the Human and Civil Rights Committee of the International Association of Chiefs of Police (IACP). The IACP is the world’s largest association of police leaders with 30,000 members from over 160 countries focusing on “thoughtful, progressive” policing.

8. Say It Ain’t So — Although she has been described by some media outlets as a reformer who is “committed to constitutional policing and is comfortable with civilian oversight” and has been described by other media outlets as a progressive, a 2018 incident is quite troublesome — to put it mildly. While being interviewed on a right wing Portland radio show on Aug. 14 of that year, she taunted leftist protesters by uncharacteristically and inexplicably stating, “I will tell you, ‘Meet me after school at 3:00. Right? We’re gonna fight.’ And I come with the intention to fight. And then you get mad because I kicked your butt. And then you go back and you wail off and whine and complain.”

That statement was in reference to an Aug. 4 fascist protest wherein anti-fascist counter-protesters were approached by overly aggressive and frighteningly heavy-handed Portland cops in riot gear. And as reported by eyewitnesses interviewed by Portland’s Willamette Week, The Oregonian and The Guardian newspapers, the police violently attacked the leftist activists by deploying chemical irritants and firing potentially fatal “flash-bang” grenades at them.

Those irritants and grenades caused serious wounds to at least three persons, including an unarmed woman resulting in hospitalization for treatment of third-degree chemical burns and soft-tissue damage to her chest. A second person was a bicyclist who had a grenade lodged into the back of his helmet resulting in head hemorrhaging, burns, lacerations and what was described as “traumatic brain injury.”

That’s nothing to gloat about, Madam Commissioner.

And it gets worse. A pro-Black grassroots activist organization called Don’t Shoot Portland isn’t too pleased with her. The organization’s founder, Teressa Raiford, who’s a candidate in Portland’s 2020 mayoral election, told the Portland Mercury newspaper that Outlaw “was hired [there] because we had protests focused on Black lives. The city’s response was to say, ‘We have a Black police chief, so we aren’t racist.’ The representation [of a Black woman] was important, but … [Outlaw] didn’t show up for the Black community.” If that’s true, I must say it’s not a good look, Madam Commissioner. Not at all.

Most are giving Commissioner Outlaw the benefit of the doubt and enthusiastically supporting her when she takes over on Feb. 10.