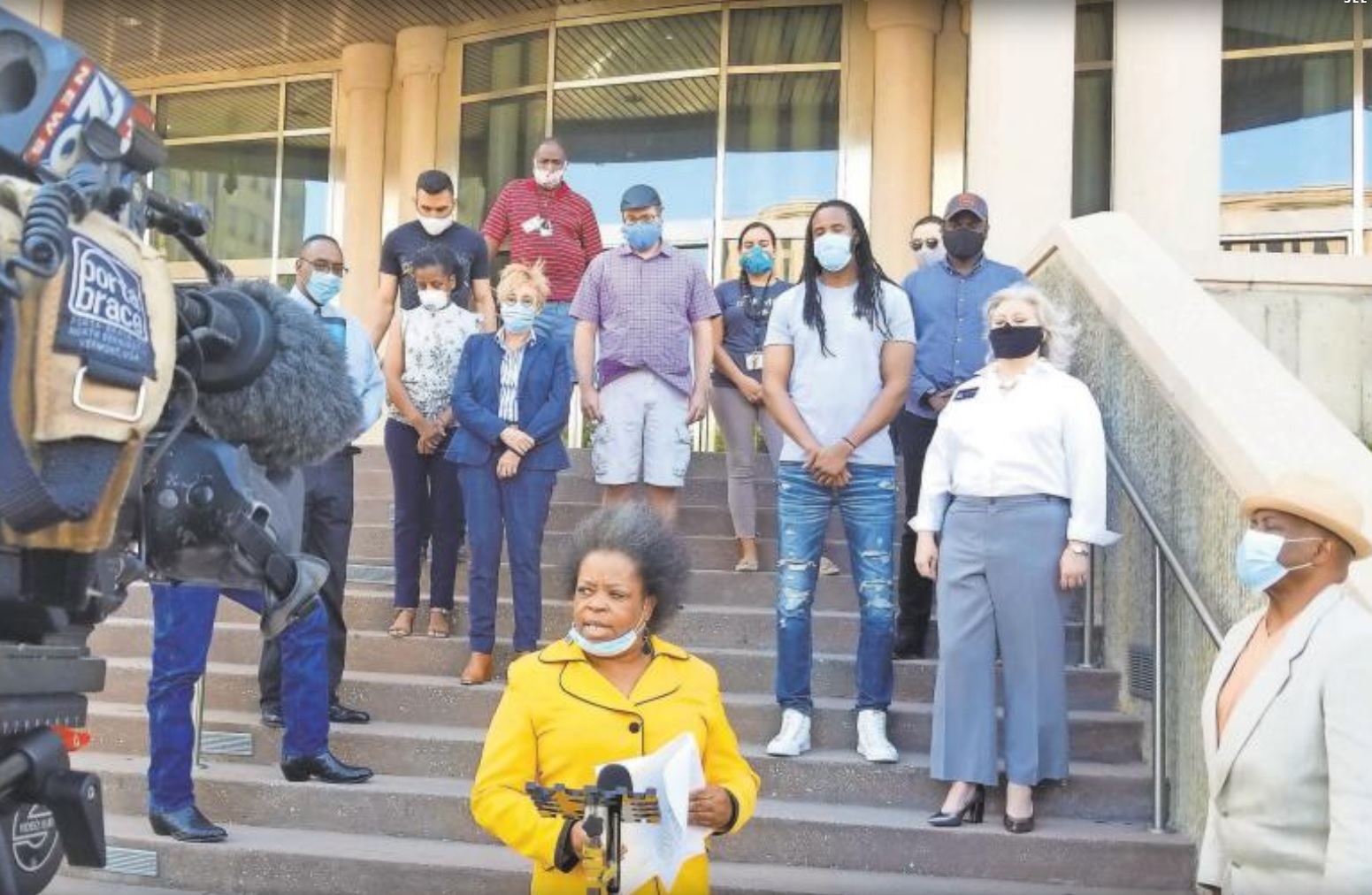 Though injustices endured by African Americans in the U.S. over the centuries have come in many forms, few have been more consistent than the incarceration of innocent men and women.

This is the claim of individuals dedicated to winning the release and exoneration of Darius Duron Elam, a former Texas Southern University student who has spent the last 37 years in prison though no evidence exists that ties him to the crime for which he was convicted. “I can sum up what we want in two words — freedom and justice,” said Darius’ brother Samuel Elam.

Sentenced to life in prison for aggravated robbery, Darius continues to maintain his innocence. Prior to his incarceration Darius, who had no criminal past, relocated to Houston from Chicago to attend TSU on a track scholarship. Moreover, he was married with newborn twins, along with another child.

According to Samuel, Darius, being a good Samaritan, gave a co-worker, Clarence Richardson, a ride home. While in route, they stopped at the Galleria where Richardson used an altered credit card of Richard Bowen, who was found dead on May 7, 1983 on Rice University’s campus with a fatal gunshot to his head.

The two men were initially charged with credit card abuse. Richardson spent three years in prison, while Darius received an additional murder charge, though convicted of aggravated robbery, and remains incarcerated in Rosharon.

“The two crime scene investigators made a listing of evidence, and neither listed this yellow, lined paper. Ninety days later an officer said he found the paper in the vehicle that had been given back to the family.

But there are crime scene photos, and none show this paper,” said Samuel, who believes officers got the paper from Darius’ backpack and planted it in the vehicle. When Darius requested DNA post-conviction testing, the Houston Police Department (HPD) reported that it destroyed the questionable sheet of paper, the only piece of evidence HPD destroyed. In 2014, post-conviction DNA testing dismissed Darius as a DNA contributor to the remaining evidence items, meaning no physical evidence links him to the crime. “Darius is wrongly convicted, ”Samuel said. “All evidence points to that. Unfortunately, the criminal justice system here in Texas and other places have made it extremely difficult to receive justice. After they get you in, it takes almost a minor
miracle to reverse.”

Darius’ family is looking for that miracle, joined by Tammie Lang Campbell, founder of the Honey Brown Hope Foundation. Campbell credits God for bringing Darius’ case to her attention. While visiting prisons on assignment from the American Leadership Forum last fall, Campbell was invited to attend the prison’s Toast Masters-like Skills for Life program. There, she met Darius, about whom other inmates told Campbell didn’t belong behind bars.

“Darius asked me if there was anything I could do to help him, and I said, ‘Consider it done.” Campbell said after reviewing his case, she was horrified, and has been involved ever since. “We want the public to see the full story, from being a student on track scholarship, to being a father snatched from his children and not being able to participate in their lives. It’s a gross injustice to all of his family, including his mother who is now 82 and not in good health,” added Campbell.

“Our mom is diabetic and a transplant patient who is wheelchair bound,” added Samuel. “She’s waiting for Darius to come home.”

The wheels of justice stalled for Darius in Judge Joshua Hill’s 232nd District Court of Harris County. Darius’ writ hearing seeking the court’s recommendation to drop the charges based on 2014 post-conviction DNA testing that dismissed Elam as a DNA contributor, was held on July 12, 2019.

The Court was scheduled to issue its decision on Dec. 2, 2019, the deadline set by the Court of Criminal Appeals. Yet, over a year after the hearing, no recommendation has been rendered.

“How long must Darius wait for justice?,” asked Campbell. “He has been wrongly incarcerated for 37 years. His life and dreams have been locked up, kidnapped and stolen by a system that does not value Black lives.”

Samuel Elam wants Harris County District Attorney Kim Ogg’s office to look into the case, reversing their previous decision to recuse themselves from involvement because of a potential conflict of interest.

Campbell said concerned individuals and organizations can support Darius’s efforts to secure justice by visiting Change.org and signing Darius’ petition, or by other means.

“People can go to Honeybrownhopefoundation.org and our Facebook page and write comments and encourage the family,” stated Campbell. “They’ll get those messages to Darius who needs them, because being in jail for 37 years takes a lot out of you. But we’re going all the way, in the name of Jesus. And by any means necessary, Darius is going to be free.”

View the case timeline via the December 23, 2020 Defender.