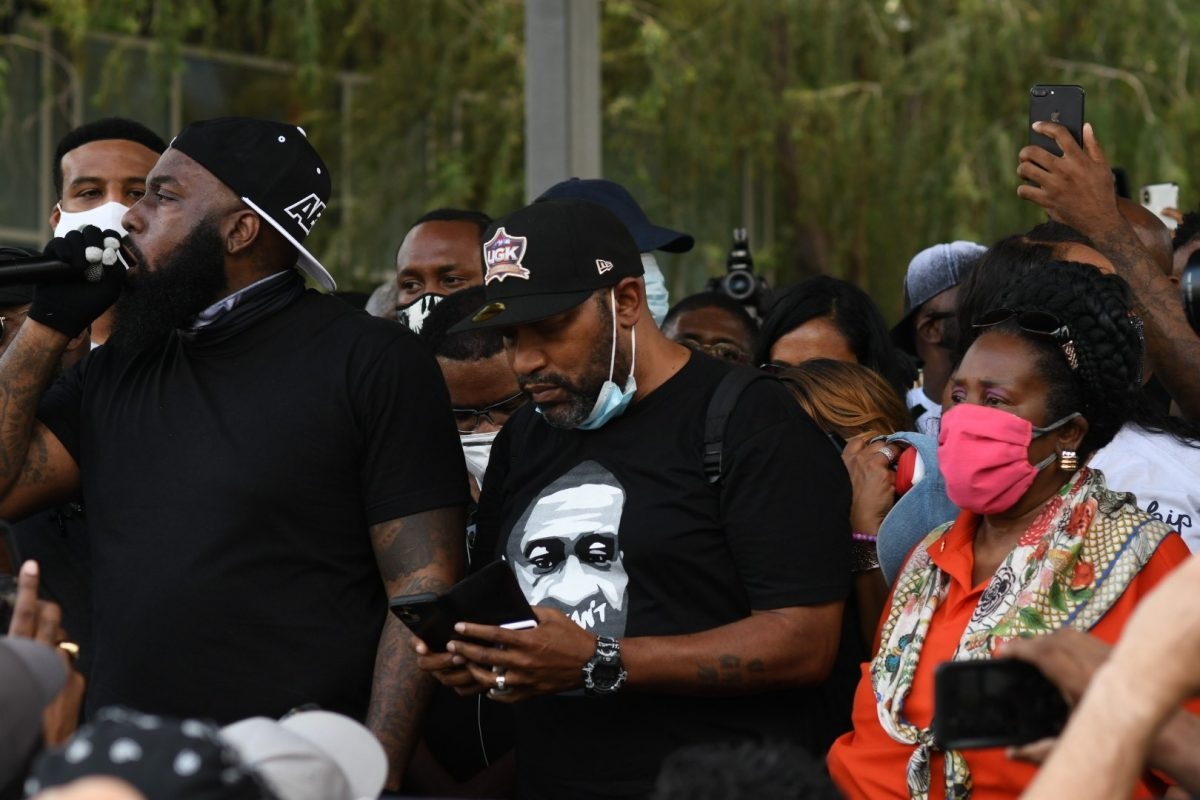 Tens of thousands marched in downtown Houston Tuesday during a rally with George Floyd’s family organized by rappers Trae tha Truth and Bun B, to protest police violence after Floyd’s death at the hands of Minneapolis law enforcement.

“60,000 people from across our diverse City marched peacefully with the family of #GeorgeFloyd and I could not be more proud of Houston. As Mayor of this City I want to thank again our police officers for their restraint, professionalism, and service,” Mayor Turner shared on Twitter.

The two Houston rappers and friends of Floyd, a former Houstonian and hip-hop artist who went by the name Big Floyd, were joined by Mayor Sylvester Turner and other city officials in a march from Discovery Green to City Hall.

“I want to make George and his family proud,” said Trae tha Truth, real name Frazier Thompson. “We’re going to show the nation how…we stand together and stand up in Houston, Texas.”

Thompson, in comments to the growing crowd before the march began, told protesters that criticizing the police was not enough, and that putting pressure on politicians to change the laws was equally important.

“They make them laws for their benefit, they make it for their best interest,” Thompson said. “If we find ways to get in their system, and tear down and rebuild, then guess what? We can make it in our best interest.”

On Houston Matters Tuesday morning, Bun B, real name Bernard Freeman, said he expected the protests to be peaceful, and asked everyone to respect Floyd’s family.

“The family will be an integral part of this rally,” Freeman said. “So we’re asking people, if they have violence on their mind, just do it somewhere else. Just don’t do it there with us and don’t disrespect the family’s wishes.”

In the interview, Freeman called for police reform, including an independent community review board with subpoena power, and a limitation on citations for police officers before they have to be taken off the streets.

“We want to start here,” he said. “We want Houston to be able to send out a message that we won’t stand for injustice, we won’t stand for police brutality and so we know that there are different policy reforms that could take place to help improve this situation in our city.”

The day was largely peaceful, and despite some tense moments between police and protesters, was defined more by frustration than violence.

Wearing a black T-shirt that read “I Hope I Don’t Get Killed For Being Black Today,” protester Brison Gresham said it was his second time protesting downtown in the past week.

“I’m feeling mad, I’m feeling sad, also confused at the same time,” Gresham said. “Like I don’t really understand why people got to treat us this way.”

Some protesters, like Carol Baker, used their voice to advocate for political change.

Floyd was killed in police custody eight days ago, and news of his death spread after Derek Chauvin, a white Minneapolis police officer, was caught on video holding his knee on the back of Floyd’s neck for more than eight minutes. Chauvin and three other officers were firred, and he was charged with third-degree murder and manslaughter on Friday.

Houstonians took to the streets later that day in a largely peaceful rally organized by Black Lives Matter Houston, where they hoisted signs and chanted in Floyd’s honor in a similar march from Discovery Green to City Hall. As night fell, Houston police officers began arresting protesters, mostly for obstructing roadways, though there were more violent moments between police and protesters, including injuries to both police and marchers, vandalized and destroyed police vehicles, and damaged storefronts.

The mood in Houston has been in stark contrast to clashes in Austin, San Antonio and Dallas, where police interactions with protesters often turned violent, including using rubber bullets and tear gas. Houston Police Chief Art Acevedo has said he is committed to not using such methods, unless as a last resort. HPD officials told Houston Public Media that officers did not use any tear gas or rubber bullets over the weekend, though they did use pepper spray in some instances on Saturday.

“We are not trying to see our city torn up,” protester Ronnie Daniel said on Tuesday. “My city is all I have. My black people are all I have. I’m all I have.”