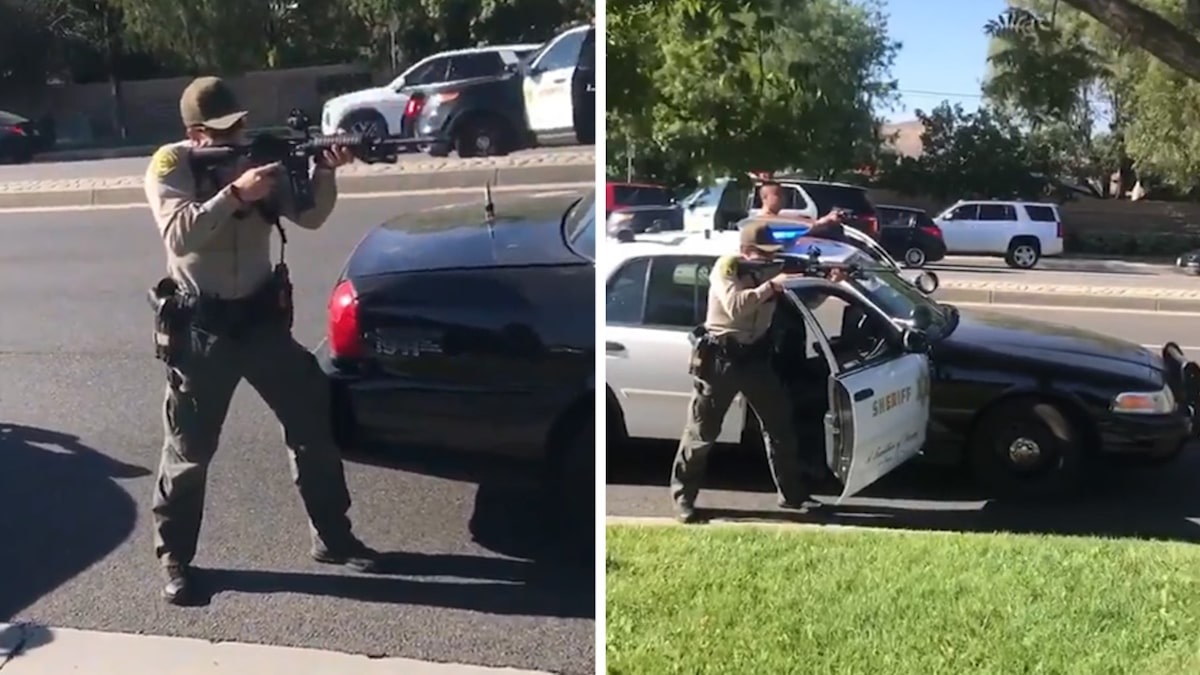 A video circulating on social media shows LA County sheriffs in Santa Clarita, California pointing guns at a group of Black male teens who had been attacked by a homeless man at a bus stop.

Tammi Collins, who shared the video on Instagram, says her son and his friends were attacked on Friday by a homeless man who had pulled out a knife and attempted to stab them while they waited at a bus stop on their way home.

The man allegedly asked the teens if they had any “crack” on them and tried to steal their belongings. Things escalated with the man pulled out the knife. “His friends only had their skate boards to cover them from the knife and whip so they held it out to keep distance from this guy,” Collins wrote.

Collins said several bystanders, including the manager at a nearby Buffalo Wild Wings restaurant called the police. What they didn’t expect was that sheriffs would arrive pointing their weapons at the young boys who were victims of assault.

I wanted to share what happened to my son yesterday in SCV when he was with a couple of friends sitting at a bus stop headed home. He was attacked by a gentleman (homeless guy) who approached them and first asked them if they had any crack then tried to take their things. The guy became so aggressive that he took his shirt off pulled out a knife and whip them tried to stabbed them. His friends only had their skate boards to cover them from the knife and whip so they held it out to keep distance from this guy. Several bystanders including the restaurant manager of Buffalo Wild wings called the police to get help for the boys but “One” caller called the police and reported two black guys are attacking a homeless guy. This is how the police responded. This is something my son and his friends will never forget. I’m still wonder how will I ever help my son recover from this traumatic experience. Please pray for my family. Please Share to protect our kids!!!

The video shows at least three sheriff officers pointing their guns at the three teens, including one officer who had a rifle. Bystanders are heard pleading with the sheriffs to drop their weapons and trying to explain to them that the teens were victims of an attack and not the aggressors.

As sheriffs continued to point their guns, one bystander yells for the young boys to keep their hands up, apparently in fear that if they moved they would be shot. Eventually, all three teens were handcuffed and detained.

Despite repeated attempts to inform the officers of what happened, it took more than six minutes for one of the sheriffs to acknowledge the Buffalo Wild Wings manager who had been standing by telling them that she was the one who placed the call and that it was the homeless man who attacked the teens and not the other way around.

The county sheriffs later revealed that they were responding to a different call in which someone claimed that the teens had attacked the man with their skateboards. Despite the mixup, bystanders chastised the officers for pulling their guns on a group of unarmed teens. One of the sheriffs responded by saying skateboards are still considered deadly weapons.

“[I] still wonder how will I ever help my son recover from this traumatic experience,” wrote Collins, who asked the public to circulate the video “to protect our kids.”

While Collins’ video ends before it’s clear what happened next, the LA County Sheriff’s Department told TMZ that the teens were eventually released and no arrests were made. What’s more, officials said they do not know what happened to the homeless man with the knife.

Los Angeles County Sheriff Alex Villanueva said he has seen the video and has concerns about the tactics employed, and says the matter is currently being investigated.

My statement regarding the recent video involving a call for service in Santa Clarita. The matter is being investigated & we will provide updates as they become available. pic.twitter.com/yu1ZCXtVKz