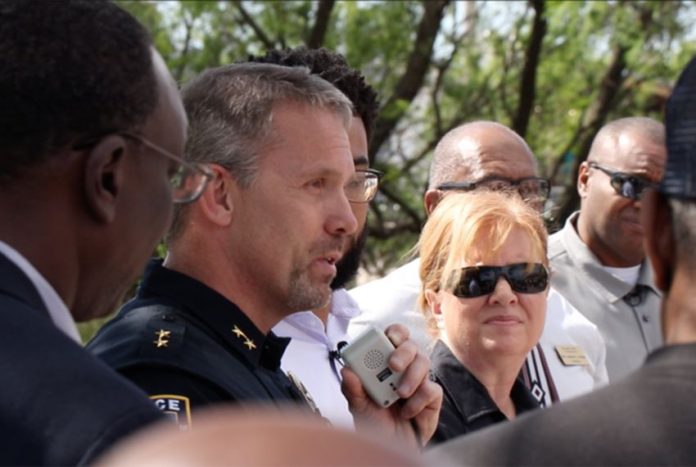 A lynching that took place 97 years ago in Abilene was publicly recognized for the first time Saturday. A college student’s curiosity played a key role in making it happen.

Bria Kimble, a senior sociology major at McMurry University, recently read a book called Lynching in America for a class.

“I’m always interested in researching things so I went to Google, typed in ‘lynching in Abilene, Texas’ and I found Grover Everett,” she said. “From there it just kind of spiraled into more questions and trying to figure out what happened.”

That search for answers led Kimble on a journey that brought her to the site of his death, a grassy field where a hotel once stood in an area of town that used to be called “Negrotown.” Her research helped bring together community leaders to organize a public ceremony to tell Everett’s story.

“The Abilene newspaper reported that three masked and robed men entered the Joe Davis Hotel looking for Mr. Everett. Shortly after gunshots were heard from upstairs, the masked and robed men ran out,” Kimble told a crowd of more than 100 people. “Everett was found lying on the floor face down at his door. He had been shot, point blank, in the chest. Shortly thereafter, he died.”

After a police investigation and witness testimony, an all-white grand jury concluded without an indictment. To this day, no one knows exactly why the masked men killed Everett, aside from his race. At that time, Ku Klux Klan membership was at an all-time high in Texas.

“By 1922, Abilene’s Klan 139 was confident in its impunity, boasting of a membership of 600 members,” said Dr. Robert Wallace, Bria Kimble’s professor. “Before it was all said and done, the Klan had spread across the United States, recruiting perhaps five million white Protestants and was fated to become the largest and most powerful nativist and vigilante organization in American history.”

Grover Cleveland Everett’s death is just one of more than 4,000 racially motivated lynchings documented in the American South, according to the Equal Justice Initiative’s report “Lynching in America: Confronting the Legacy of Racial Terror.” In Texas, there were 337 others like Everett who were executed without cause, without a trial and without justice.

During the ceremony, members of the crowd were asked to come forward and scoop soil from the ground into glass jars.

“The Lord said to Cain, ‘Where is Abel, your brother?’ He said ‘I don’t know. Am I my brother’s keeper?’ And He said, ‘What have you done? The voice of your brother’s blood cries out to me from the ground.'” Darden recited from Genesis 4:9 to the crowd, which included Abilene’s first African American mayor Anthony Williams, and other community leaders. Abilene Police Chief Stan Standridge was in attendance, but not scheduled to speak. After Pastor Darden’s speech, Standridge was inspired to take the stage.

“I stand here convicted. I’m just going to be honest with you because I represent the police department that carried out these injustices in 1922. So hear me: I’m sorry. I’m sorry,” Standridge said.

In the crowd to hear the apology were four generations of descendants of Grover C. Everett. After the ceremony, the family expressed their gratitude to Standridge.

“I really just want to say thank you for what you stood and did,” Aretha Alford, Everett’s great granddaughter, said to Standridge. “You did not have to offer an apology for all of those that came before, but that went volumes for me. So I truly thank you and appreciate you for that.”

“Yes, of course!” Standridge responded as they embraced in a moment of closure.

For the Everett family, the details of his death had long been a mystery. His granddaughter, Margie Davis, said she learned about the lynching just weeks ago. Volunteers at the Hopkins County Genealogical Society in Sulphur Springs located the family after extensive genealogical research that started with the work of Kimble and Wallace.

“You know you see documentaries of other people, but when it’s in your household, it can really just kind of stab the heart. It was kind of just overwhelming,” Davis said. “I just thank everyone for everything that they’ve done and the time to put this together.”

The next step for organizers of the ceremony is to have a historical marker placed at the site so Everett’s story will be remembered forever.