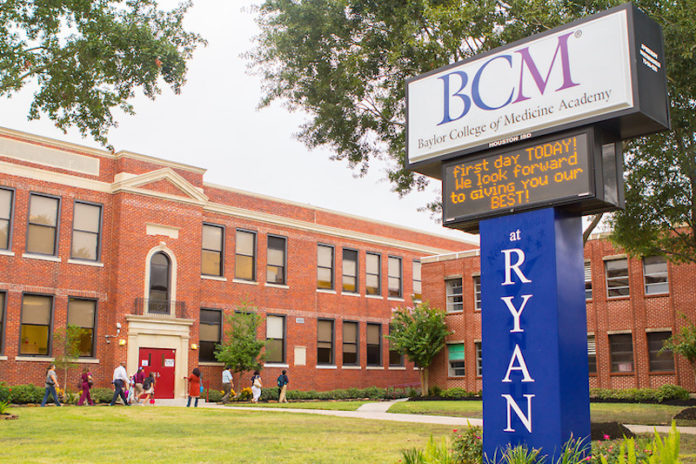 Baylor College of Medicine at Ryan has received the Magnet Schools of America President’s Award, one of the organization’s top national awards, as well as being honored with a Magnet Schools of Excellence Award.

The three schools are among 244 public magnet schools and programs from across the nation to receive the awards. They were selected for their commitment to high academic standards, school diversity, specialized curricula and instruction, family engagement, and community partnerships.

“We are so proud of these recognitions for the wonderful magnet programs offered to our students,” said HISD Superintendent Richard Carranza. “HISD takes great pride in its specialty schools, and to be ranked among the best in the nation is extremely gratifying and is a testament to the hard work going on in these schools.”

The Energy Institute, which will graduate its first class this spring, is the nation’s first high school devoted to preparing students for careers in the energy field, including geosciences, offshore technology, and alternative energy.

Magnet Schools of America represents about 4,340 magnet schools serving nearly 3.5 million students and supports and serves the leaders and teachers of magnet and theme-based schools, while promoting the development of new magnet programs and public schools of choice.

The 2017 awards were handed out during a ceremony at Magnet Schools of America’s 35th National Conference, hosted by Los Angeles Unified School District in Los Angeles, on April 26-30. For a complete listing of awards, go to magnet.edu.