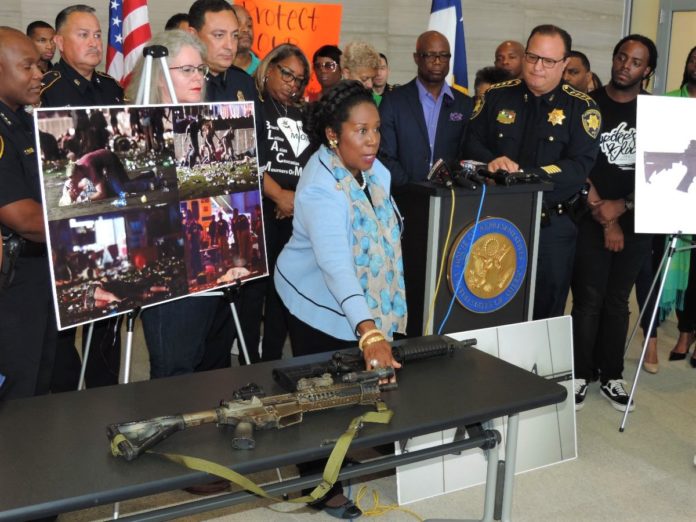 The recent press conference held by Congresswoman Sheila Jackson Lee calling for “gun sense” legislation was well attended by supporters of her efforts, to say the least. Here’s what attendees had to say on behalf of efforts to curb gun violence.

We have to have leaders; we have to have people that are going to act boldly to change the [gun] laws. How many more of these press conferences do we need to have in order to get the message? As a member of law enforcement I am calling on congress to please do what’s right. Do what the people elected you to do. And that is do the will of the people and pass comprehensive, universal background checks. (Alan Rosen, Harris County Constable, Precinct 1)

There are over 11,000 gun homicides per year, over 21,000 gun suicides, and 84,000 non-fatal injuries due to gun violence. So by my count, that’s over 100,000 times people use guns to kill and main other people. And this costs over a quarter billion dollars each year… People convicted of domestic violence should never be allowed to own guns, period… While 90 percent of guns used to commit a crime are illegally obtained, every illegal gun starts out as a legal gun. We need better record-keeping of firearms…Let’s improve the background check system. We need to have permits to purchase. Every state requires you to register prior to exercising your constitutional right to vote. Why shouldn’t we register prior to exercising the right to bear arms? Some states like Texas require photo ID prior to casting your ballot. So why can’t you show your ID before purchasing a gun?… It’s time for Congress to stop playing politics and put evidence based policies into law. (Dr. Cedric Darden, Emergency Room Physician)

What happened in Las Vegas was a tragedy. And while high profile mass shootings receive significant media attention, let us not forget that 93 people are shot every day in America. Over 33,000 people die every year because of gun violence, and thousands more survive with severe injuries. October is Domestic Violence Awareness Month. One out of three American women will experience domestic violence in her lifetime. The presence of a gun in this situation makes it five times more likely that this woman will be killed…Only 16 states, and Texas is not one of them, require background checks on all handgun sales…Boyfriends now kill as many women each year as husbands do. (Aimee Mobley Turney, Moms Deman Action)

This, ladies and gentlemen, is about values. It’s about valuing people over politics. It’s about valuing public safety over personal success. We have an issue in this country with values. It’s about common sense. Imagine these guns (semi-automatic weapons and automatic weapons) being in the hands of civilians. All of us, most of us have a license to drive a car. What I don’t have is a license to drive a race car on the streets of Houston. You know why? Because that would be ludacris. Because if I had a racecar, I could not be responsible. Law enforcement would not control my driving. I would injure people, kill people because a race car does not belong on the streets. Everybody should know that a military-style weapons does not belong in the hands of civilians. That’s common sense. These people who are crying tears over lost loved ones are real people with real futures whose lives have been directly destroyed. When Congress fails to act, and should it fail to act again, it will declare we are not people of common sense, we are not people of consciousness, and we are not people of compassion. America needs to vote not just politics, we must vote principle. We’ve got to decide that people, no matter what’s in front of their name, a “D” or an “R,” if they don’t support human life and public safety, vote them out. (Pastor James Dixon, Community of Faith Church)

If passing legislation that reduces gun violence is not important to you, we hope and pray that you can look at your little children and it be important enough for them that you move wisely… A culture of violence has been created in this country, and it starts in Washington DC. So, what we’ve done is replace the worship of God with the worship of guns. (Deric Muhammad, Nation of Islam)

There are 89 guns for every 100 persons; almost one gun per person if we spread them out. U.S. gun owners comprise 22-29 percent of the overall population. The average gun owner owns three guns. More than half of them own just one or two. That’s why we’re not interested in overturning the Second Amendment. I wish people would stop talking about getting rid of the Second Amendment. We can’t get rid of the Second Amendment without a massive voting process that would probably take years because each state would have to go through the vote. Fourteen percent of [gun owners], 7.7 million people, or 3 percent of the overall US population, own between 8 – 140 guns. Now, this does not mean that we would pass a law to go in their house and get the guns out. That’s another myth that people have. Three percent of American gun owners own half the guns in the nation. Steve Paddock was part of that 3 percent.