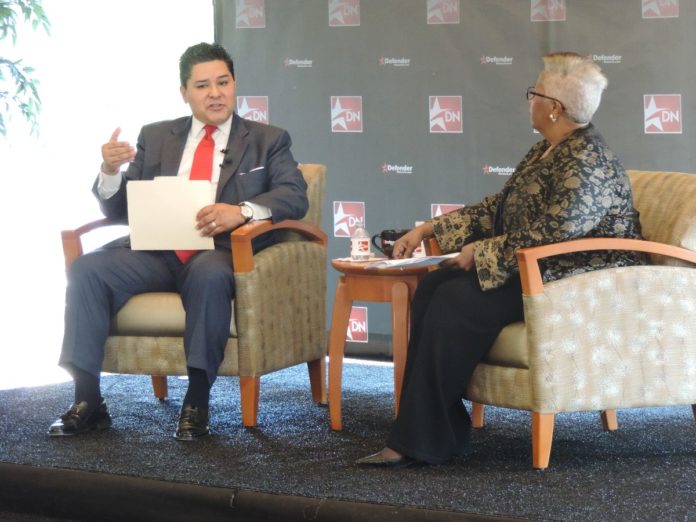 The Houston Independent School District has seen its share of conflict and criticism. In the nine months that he has been on the job, Superintendent Richard A. Carranza says he has seen every conceivable challenge. But Carranza said he’s already facing those challenges head on.

Top accomplishments at HISD during the first year…

“One of the biggest [accomplishments] is we’ve gotten our bond program back on track. We are now opening schools and schools are now coming in under budget. With the savings, we’ve been able to reallocate that money back into construction.

“We’re also starting to have some very targeted conversations about meeting the needs of all students. We’re revamping our student nutrition services. If you consider the fact that over 85 percent of our students qualify for free and reduced lunch, this is the place where many of our students get one, two or three of their meals, we have to have good nutrition.

“Also, there was no trust in the school district so I made it a point to be very visible and accessible. And we made our presence known in Austin this legislative session.”

“The school board has the authority, the voice and the responsibility to set the policy direction of the school. So, when you have a conservator that comes in and takes over those decision-making responsibilities, what you’re doing is abdicating the responsibility to our students. So, our plan for Worthing and Kashmere and a number of other schools is working with Achieve 180 to provide resources, support, structure so they have a chance to come out of their low performance.

“Specifically, we look at the feeder patterns and how we are paying attention to those six components in all of those feeder pattern schools. Last year at this time, Worthing had one of the highest unfilled teacher vacancies. We made a leadership change, now Worthing is almost completely staffed. Not with brand new teachers, but experienced teachers who are coming to make a call to action.

School improvement is not lofty ideas. It’s hard, blue-collar work. We are bringing experienced teachers, great leadership, we’re actually networking the schools in the feeder pattern and we’re providing time in the school day for professionals to collaborate and apply best practices. We are also providing coaches who are embedded to give advice. We’re coaching the professional.”

Fixing the unequal distribution of Title 1 monies, which provide funding for at-risk and poor children…

“That is exactly the kind of equity issues we’re diving into. Title 1 is meant to provide additional resources for students in poverty. So, the very fact that we have a district process that penalizes schools that need that money the most is something we’re going to stop. There are federal regulations on how to regulate Title 1 funding and how you report. So, without the nuances of every detail there, I can tell you the conversations are that we are not going to penalize our historically underserved schools. We will be fixing that issue.”

Improving the education of Black males in HISD…

The board has been visionary in casting policies saying we’re not going to suspend kids in pre-K through second grades. But it’s one thing to have a policy. It’s another thing to implement that policy. We said this year, we’re going to talk about wrap-around services, restorative practices and implicit biases we all bring to our work. This work is life and death. We have a system that is perpetuating a permanent underclass. Either we believe that Black students can’t learn, won’t learn, it’s on them, or it’s on us. I say it’s on us. It’s a hard conversation. I’m calling us out.

Look at Trayvon Martin, there’s racism involved, I get it. But the fact is that Trayvon was suspended from school for 10 days on a zero-tolerance policy that district has. He was kicked out. That happens to many of our African-American boys, we kick them out. Trayvon’s parents sent him to Sanford, Florida. I would say if that school district didn’t have a zero-tolerance policy, Trayvon Martin would’ve been in school that next day on Monday and not killed the night before. People want action plans. It’s about the environments that we create in our schools.

HISD’s lagging behind on teacher salaries…

“I was appalled to see the salary schedules when I started working here. Nine months on the job, I can tell you, everybody needs a raise. There’s a number of factors and it’s not simplistic. We have a decentralized system where we send money to school sites. That creates inefficiencies for us at the central office in terms of managing resources. When you don’t have the ability to leverage our size, buying power, it creates inefficiencies in how we develop teacher capacities. We are really looking at how to become more centralized in our approach.

“We have a very poor school district. The kids that come through our doors are poor. We have an incredibly effective clientele that we have to provide services for. The problem is that we have a lot of these challenges. The good news is that the board and I are united in the fact that we need to increase teacher and classified worker pay so that people are making livable wages. It’s a priority.”