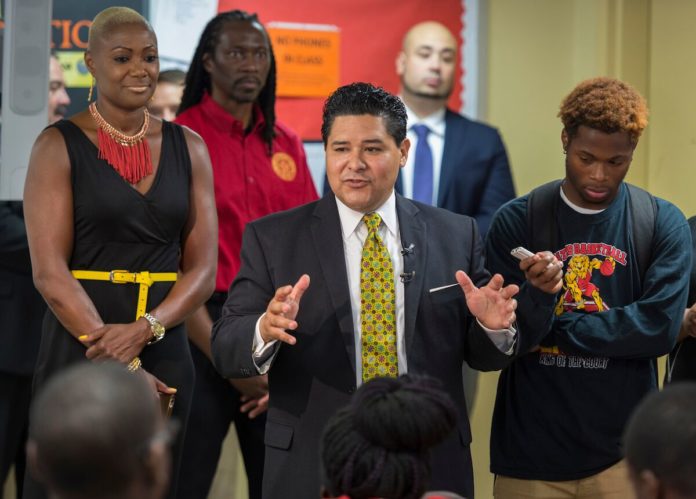 Houston Independent School District Superintendent Richard Carranza will deliver his first State of the Schools address Feb. 15, 11:30 a.m. to 1 p.m.  to a sold-out ballroom crowd at the Hilton Americas Hotel for the annual luncheon. Carranza’s speech will focus on the district’s ongoing efforts to strengthen HISD’s academic and fine arts programs, improve equity within schools, and create a world-class school district.

This year’s State of the Schools luncheon, presented by the HISD Foundation, will also feature the district’s inaugural Distinguished Alumni Award, which will honor HISD graduates who have distinguished themselves with extraordinary achievement and meaningful contributions in their chosen profession and community. The awards will be presented to journalist and author Roland Martin, a graduate of Yates High School, and BP Vice President of Operations, Gulf of Mexico, Aleida Rios, a graduate of Milby High School.

Additionally, HISD Board of Education President Wanda Adams will speak at the event, along with 2016 HISD Teachers of the Year Christina Carter-Woods and Hillary Smith.

Those who are unable to attend but want to follow along may watch the address streamed live online at Houstonisd.org, Facebook.com/HoustonISD, and ABC13.com.

Photos, transcripts, and video of the State of the Schools, as well as the district’s 2016 Annual Report, will be posted online after the event at www.houstonisd.org. Follow on Twitter — @HoustonISD, @HISDEspanol — to keep up with State of the Schools highlights as they happen.