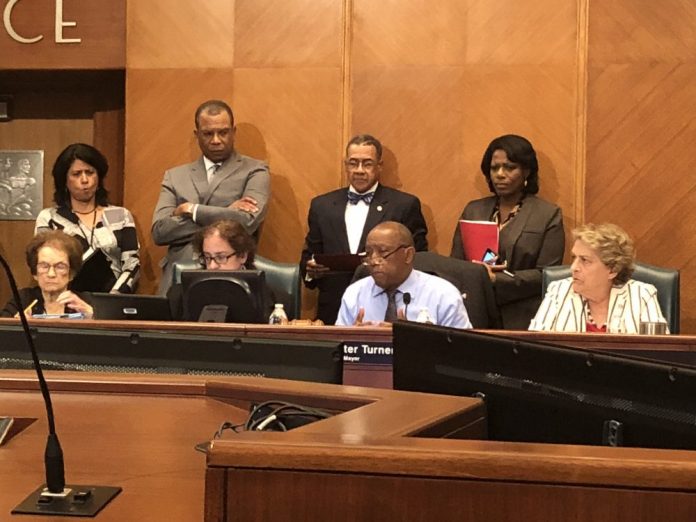 Houston’s nearly $5 billion budget for fiscal year 2019 was approved by the Houston City Council after nearly six hours of discussion.

The budget closes a $114 million deficit and does so by not cutting jobs or major city services. It also fully funds employee pensions and doesn’t include sales of city real estate.

Using one-time funds from special accounts and a lawsuit settlement, Mayor Sylvester Turner balanced the budget, but did it in a way that some council members and Controller Chris Brown had concerns with.

The lack of a “structurally balanced budget,” a phrase uttered consistently over the budget discussion period, will be problematic over the coming years. That is when incoming revenue matches spending.

In Houston’s case, spending outpaces income. To make up for it, money comes from other accounts and sources.

One of the council’s most fiscally conservative figures, at-large council member Christie, accused other council members of not having a spine for not standing up for stiffer cuts to help balance the budget. He said promises made about cutting extraneous spending have never been made good on.

“We continue to needlessly expand bureaucracy,” Christie said. “We need to bring some common sense back to government.”

The comments cut against the mayor, who protested firmly.

The last budgets approved were not structurally balanced, Turner said. If there were problems with the budget, the mayor said then council members should’ve offered specific amendments to fix it.

“I don’t think you’ve done anything,” Davis said to Christie. “I thought that was somewhat disrespectful. So, I’m going to be disrespectful in return.”

Christie resigned his seat as the head of the budget committee at the end of his comments on the budget.

“I will accept your resignation without hesitation,” Turner said.

Most of the day’s discussion centered on amendments presented by council members. Most were withdrawn and few moved money around in the budget.

Wednesday’s meeting was unusually long because of the Memorial Day holiday pushing all of the council’s business into a single day. Normally, council meets on Tuesday afternoon for public comment and then Wednesday for council business.