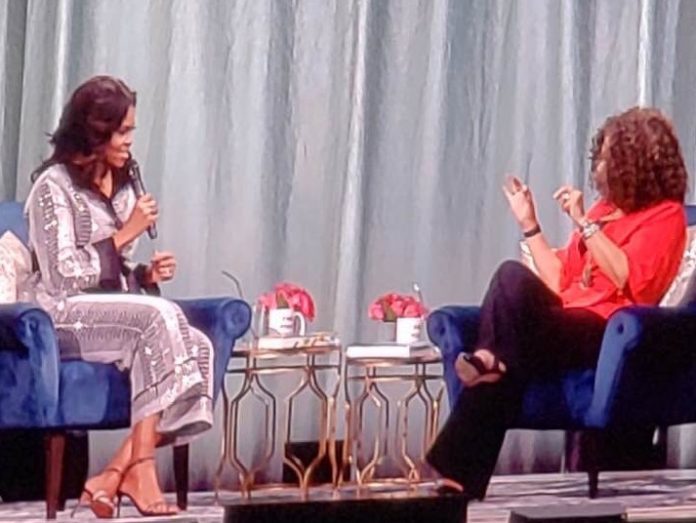 There’s a reason Former First Lady Michelle Obama’s book tour is selling out stadiums across the country. The personality that has made her #ForeverFlotus is on full display, keeping the audience entertained as she recounts through humor and inspirational messages her journey from a working class family in Chicago to First Lady and beyond.

Obama recently made a stop at Houston’s Toyota Center to a packed house. The event opened with clips from some of Obama’s wonderful viral videos and late-night show appearances from over the years. After some local residents (Brigitte Hilliard, Era Harden and a local girl scouts) opened the show talking about what they were “becoming,” former NPR host Michelle Norris took over, introducing the mammoth bestseller of a book, which was released last November and is still easily the top-selling book of 2018.

By the time Obama took the stage, donning a sparkly silver pantsuit, she immediately brought an intimate feel to the stadium. She talked about the same things she covered in the book, growing up in Chicago a driven kid hungry for education and accomplishment who became a Harvard-educated lawyer, a box-checker who loved punctuality and order and plans, and who met a man who wasn’t particularly interested in any of those things.

Over the next hour and a half, she gave the audience their money’s worth. Here are a few of the highlights.

On the importance of fathers…

A father’s love makes you believe early on that he not only loves you, but he respects you. He puts you up high on the hierarchy. That is so important for the strength of a girl. Those early men in a girl’s life help her set her bar. And my father, in everything he did, the way he carried himself in the household, the way he went to work, the way he loved his mother and the women in his life, my bar was really high of what I would allow in my life. So we cannot underestimate the role men play in creating strong women.

On making it work with Barack….

There are many young people that look to us. We are #RelationshipGoals. ‘Michelle and Barack, yeah!’ As role models, I felt like we have to help people understand the journey to being a solid couple and that there are bumps in it and it’s hard. If we pretend like its easy, then when couples go through the natural hardness of marriage, they quit. They think Michelle and Barack didn’t go through this but yes….Marriage is hard and we don’t say that enough to young people. It’s one of the hardest things that you will ever do. It’s two independently people, hopefully whole, and oftentimes not whole trying to build a life together. You will be fine. You have to work through that. We went to counseling and counseling can look like all types of things. That can be being open to all types of things. I certainly thought counseling was going to be to fix him. Which is why I went. Brought him here to get fixed. I was like, Doctor, talk to this man. Fix him. Then the doctor looked at me and I was like, why you looking over here. I am fine. He’s my problem. And through counseling and the work of it, you understand it’s hard and you’re both flawed. What I learned was, it wasn’t Barack’s job to make me happy. We made each other happy. I had to figure my life out and a lot of my anger was I was looking for him to fix things that only I can fix for me and I wouldn’t have learned that had we not talked openly with someone. Counseling can also be the time you get with your girlfriends because sometimes you just need to go and talk about him badly and have someone just go, “Girl, you are right.” You let it out and then if you have good friends, they will tell you your problems, too. If they’re just agreeing with you, you might want to question that. But it fills you back up to go in and continue working on it. That’s how marriages last, not because there are no issues, but because there are always issues.

On supporting Barack’s race for president….

I kinda, sorta thought he wasn’t going to win. I was planning on being that supportive person at the end. “Honey, you gave it your best, let’s just go home.” I had that speech ready, then he won Iowa and I was like aww, snap. But I believed in Barack Obama. I said this when I campaigned, this is a special brother. Not because he’s my husband, but it is rare to find the gift of intelligence, honesty, charisma, heart, values, intellect, deep curiosity and a willingness to put yourself out there. Then an ability to put yourself out there and run a campaign, then be the president. This is a hard job. I’ve tried to tell America that.

On raising her daughters….

On dealing with the negativity…

The toughest time for me in the whole process, people don’t remember because now it’s like, “Michelle Obama, she’s an icon, we love her.” And I’m like, “No, yall didn’t.” At the time stuff like that was going on, for self-protection, I couldn’t take it in. You don’t feed on the negative stuff. So there are times I just had to turn off that energy because I also felt like as First Lady in order to connect with people around the country on their term, I couldn’t  take their anger or assumptions because not everyone thought that way. But it’s important to show, particularly young people that even your biggest icons, your biggest role models had their bumps, that the journey of becoming is fraught with this kind of stuff for a lot of us. We all face these challenges. Mine were just very public and just felt hurtful because it was the image of who I was in the world. What was being  said had nothing to do with who I was, but it taught me that politics was a game. I wanted people to remember that’s what we do to each other. We make assumptions based on no information. We decide who we like and don’t like based on skin color and things that you’re taught. And we’re often wrong in our assumptions on both sides.