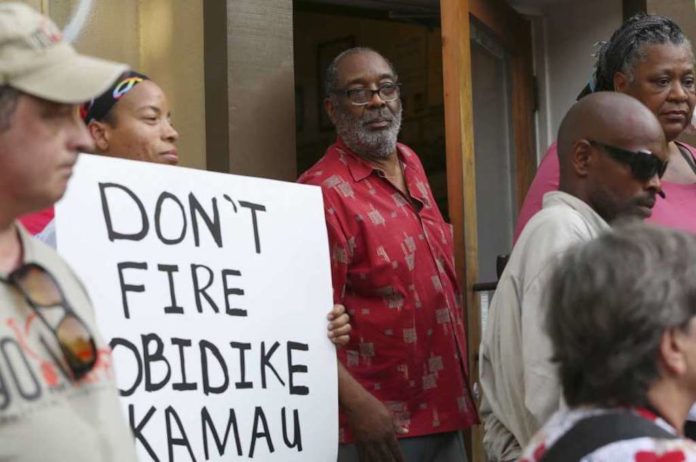 For more than 45 years, KPFT 90.1 FM has been a staple in providing community news – particularly issues that impact the Black community. But now, some former employees and their supporters say the love they’ve shown the station hasn’t been reciprocated. And they say racism and discrimination are to blame.

The issue began in late July when the station, owned by the Pacifica Foundation, decided to fire the interim general manager, Dr. Obidike Kamau, sparking outrage. The station had five African-Americans on paid staff, and decided to let three of the five go.

“It’s very disappointing,” said Kamau. “We were on the verge of wonderful things.”

KPFT interim executive director of Pacifica, Bill Crosier, said Kamau’s firing came primarily because – in three months on the job – he hadn’t developed a financial plan for getting the station out of debt. The other employees who were fired – the station’s news director, membership coordinator and interim development director – weren’t given reasons for their terminations.

“We had to lay off some additional people because we wouldn’t have been able to make payroll otherwise,” Crosier said.

Black United Front chair Kofi Taharka, who led one of the protests, said discrimination is to blame.

“The previous general manager, a white man, was given 15 years to turn the station around – and didn’t,” Taharka said. “They gave Obidike three months.”

DeWayne Lark, the past chairman of KPFT’s board, believes that Crosier and the left-leaning Pacifica Foundation have colluded to keep minorities and women out of leadership positions, a claim Crosier vehemently denies.

“There’s no racism or nefarious plan behind the firings at the station,” Crosier said. “I know people are upset and being stirred up. I know what it looks like, and I wish it didn’t look the way it does, but [Kamau’s firing] is really about finances.”

“I beg to differ,” Kamau said. “They don’t want to believe it’s racism because ‘good white liberals’ never think they’re racist and have a problem when people call them on it.”

Kamau, who said he was “flabbergasted” by his firing, feels he wasn’t given a fair chance to solve the money problems he inherited.

“They are addicted to the fund drive model and that’s a dying model. They didn’t give me a chance to turn around previous financial woes,” Kamau said.

The local station is in debt – about $240,000 – and the Pacifica Foundation is more than $7 million dollars in the hole. The past three local fund drives haven’t come close to succeeding. The most recent one, in June, met just 45 percent of its goal.

Crosier said neither he, nor Kamau’s replacement, longtime deejay Larry Winters, collect a salary because of the financial issues.

Kamau has retained an attorney and plans to file a complaint with the Equal Employment Opportunity Commission.