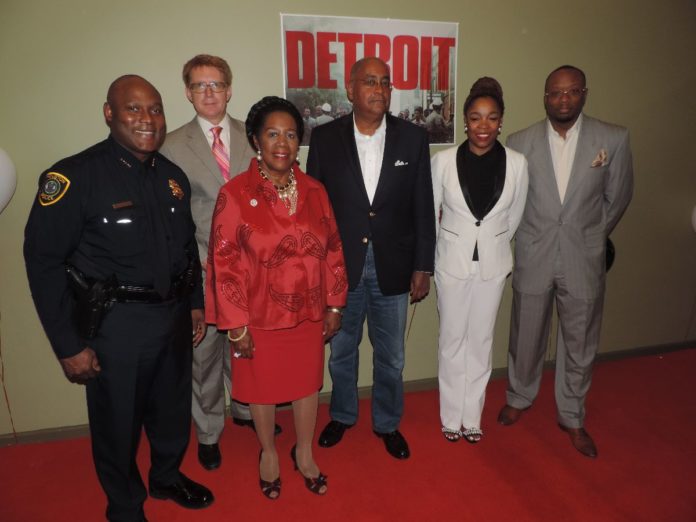 Criminal justice reform has become a primary goal of several area lawmakers, who vow to fight diligently for reform, despite the current administration trying to rollback advances.

Two of those lawmakers – Congresswoman Sheila Jackson Lee and County Commissioner Rodney Ellis – were recently joined by Houston Police Department Assistant Chief Troy Finner and other law enforcement, religious and community advocates to discuss the problem, and their commitment to fighting it.

“We had an outstanding criminal justice bill on the table. It was ready to be signed by President Obama but was stopped by the 2016 election,” said Jackson Lee, during a panel discussion before the local premiere of the movie, “Detroit,” which deals with police brutality in 1960’s Detroit.

Jackson Lee said she and others are still working to push the Law Enforcement and Trust and Integrity bill through.

“I don’t want this to be stopped by politics. It has to be motivated by what is right. And what is right is that we need sentencing reduction, prison reform so that those that are in prison can come out and have a second chance at life,” she said.

Both Jackson Lee and Ellis also want a light shined on reforming the country’s bail system.

“If you come into contact with the criminal justice system and can’t afford a lawyer, the court will provide one for you,” Ellis said. “But here in Harris County we’re bigger than 26 states, so public defenders can only handle 10 percent of their cases. When the court has to give you a lawyer, who do you think will they appoint?” Ellis asked.

“Oftentimes it might be someone who wrote a campaign check. It’s an inherent conflict. How is a lawyer going to fight for you, if the judge picked him? That’s what happens in Harris County every day.”

Bail reform has been a passionate fight for Ellis, who filed a lawsuit against the county this past year.

“A lot of people are in jail in this county because their lawyer ought to be in jail, because they’re not fighting for them,” Ellis said. “If we get arrested for a misdemeanor, if two of us have money, we post bail, we get out. If two of us don’t, we stay in. Remember, we’re innocent until proven guilty, but once you’re in there, you lose your car, you lose your job.”

Ellis pointed to two cases to hammer home his point.

“Sandra Bland didn’t have $500 cash when she was arrested,” Ellis said. “Waller County didn’t take credit cards or checks. You have to have money in cash right now or you stay in,” he said.

“Meanwhile, Robert Durst, who faced a felony charge of chopping someone’s head off, gets a lawyer, gets bail…he gets on a private plane and now he’s gone. How is he less of a risk than Sandra Bland, someone moving to Waller County to take a job? That system is not right.”

Jackson Lee said putting criminal justice reform back on the agenda will take input from everyone.

“Where are the advocates for issues dealing with sentencing reduction, prison reform?” she asked. “How are we going to get it passed if there is no public outcry for ensuring the people released from prison have anger management training, job training? All of that is in that bill and all of us have to work to see it through,” Jackson Lee said.