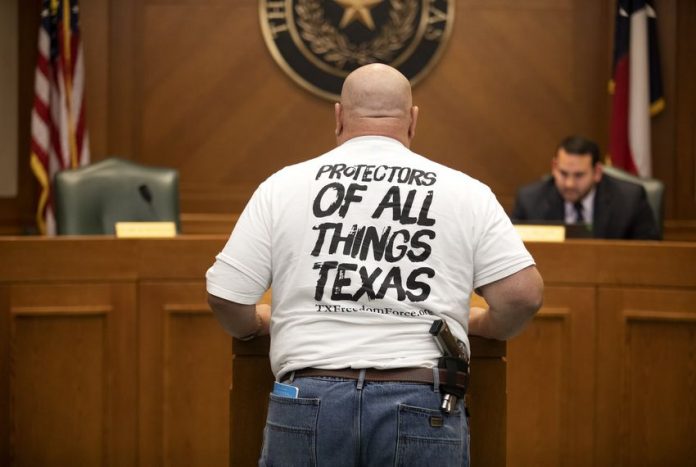 Tensions from an ongoing statewide debate about whether Confederate monuments should be preserved or taken down boiled over at the state Capitol on Tuesday during discussion of a bill that would expand protections of historical monuments — and even change existing law that singles out Confederate markers for protection.

At one point during the often heated debate on Republican state Rep. James White’s House Bill 583, another lawmaker took people testifying in support of the bill to task. State Rep. Jarvis Johnson took issue with arguments that tearing the markers down amounts to erasing history. Johnson said Confederate monuments are particularly harmful to people of color.

“No, we’re not going to celebrate that. That’s vile.”

The bill from White of Hillister would allow whichever government has jurisdiction to alter any monuments — if they are less than 20 years old. City or county monuments that have been up between 20 and 40 years could only be altered, relocated or destroyed if voters approve. Changes to state monument that have been up between 20 and 40 years would require a majority vote of the Legislature. And monuments erected more than 40 years ago couldn’t be altered, moved, relocated, renamed or destroyed, the lawmaker said.

Several Confederate monuments in the state are more than 40 years old. But before the hearing, White told The Texas Tribune that his bill was simply about “getting some order moving forward.”

“It’s not just Confederate statues that would be caught up in this,” he said. “This could also help out on gentrification. You go into these historical old Hispanic or black communities undergoing transition through gentrification, and they may have plaques or monuments and buildings of yesteryear they want to keep up, so this could possibly help them, too.”

Tuesday’s debate came months after a state board that oversees the Texas Capitol grounds voted unanimously to remove a controversial Confederate plaque that falsely asserted the Civil War was “not a rebellion, nor was its underlying cause to sustain slavery.” It also came on the heels of efforts by a conservative nonprofit known as the Conservative Response Team to press state leaders to move legislation — including White’s — protecting Confederate monuments while cities across the state grapple with whether to take such markers down.

More than a dozen people who came to testify on White’s bill did so in favor of the legislation. And while White’s bill is not meant to solely apply to Confederate monuments, many who spoke Tuesday did so hoping to protect such landmarks.

Daniel Miller with the Texas Nationalist Movement, which says its mission is to secure and protect the political, cultural and economic independence of the nation of Texas, said that his godmother was a Holocaust survivor and, because of her, he learned how to say in German the phrase, “I will not forget.”

“Imagine what would happen if some politician decided they wanted to contextualize the history of World War II and the Holocaust and their solution was to tear down Auschwitz? I can’t fathom what the outrage would be,” he said. “But somehow, someway, we find folks out there who believe there are parts of our history that are so objectionable that we have to tear down monuments as if somehow forgetting these things is the most important thing.”

After Tuesday’s hearing, Johnson told the Tribune he took issue with many claims made by the people who testified in favor of White’s bill. His most fervent rebuttal, however, came in response to testimony from former Texas Land Commissioner Jerry Patterson, who said White’s bill “was about more than Confederate monuments” but “a slippery slope that begins with Confederate monuments.”

During his testimony, Patterson said, “Everything is in jeopardy in the future.” To further his point, the former commissioner questioned whether there would would be backlash to a monument erected for the Buffalo Soldiers, cavalry units composed of African American soldiers after the Civil War, since they “participated against a genocidal war against an entire race of people, the American Plains Indians, and put them on reservations, in effect, as slaves.”

“No one is without sin,” Patterson said. “No ethnic group is without some black marks in their past.”

That and other comments drew ire from Johnson.

“People have got to stop repeating this idiotic slogan about how these monuments are history,” said Bryan Register with the group De-Confederate Austin. “They are not history. … If you honor someone for doing something, you are saying it was good.”

After more than an hour of testimony, White’s bill was left pending before the committee.

“I don’t know what’s going to happen to this bill,” White said. “A lot of bills die and this one may likely die, but I just hope one day that we can all respect everything that happened in this country and learn from all of it and stop all this national navel gazing.”