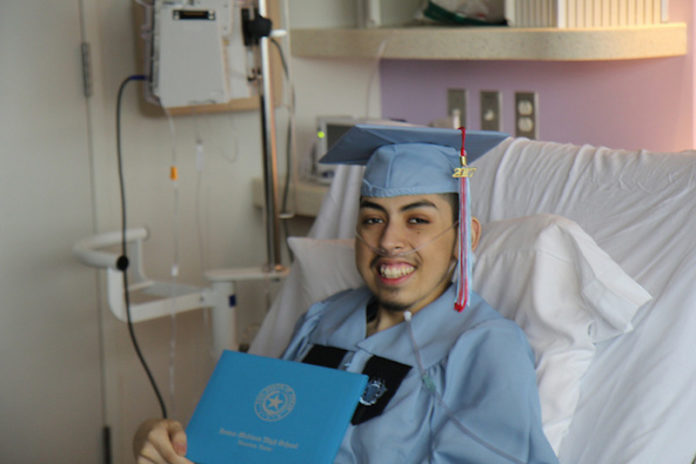 Surrounded by his family and doctors, as well as HISD Board President Wanda Adams, Madison Principal Orlando Reyna, and staff members, senior Erick Reyes donned a graduation cap and gown for a moving bedside ceremony at Texas Children’s Hospital on Friday.

Erick has been suffering with bone cancer for the past two years and was recently moved to hospice care. He enrolled at Madison in 2012 and was well on his way to graduation when he was diagnosed with bone cancer.  Erick struggled to continue his studies while receiving treatment but had to stop due to the severity of his illness. He went into remission and returned to campus to finish his final classes, but unfortunately, the cancer returned. Although Erick was unable to complete his dream of walking across the stage with his classmates, he was pleased to be honored with his diploma.

Erick’s father, Rene Reyes, his mother, Maria Reyes, his aunt Rosalba Reyes from Monterrey, Mexico, his brother Rene Reyes, and his sister Yessenia were at the ceremony. His little sister Carolina could not attend because she was in school.

“I want to thank you for inviting me here,” Trustee Adams said. “On behalf of the Houston Independent School District and Superintendent of Schools Richard Carranza, I would like to present to you your diploma of graduation from Madison High School.”

Principal Reyna completed the ceremony. “By the power vested in me by the State of Texas and the Board of Education of the Houston Independent School District and upon recommendation of the faculty of James Madison High School, I confer onto you the high school diploma with all rights and privileges on this day, March 10, 2017,” Reyna said. “Now you may move your tassel from right to left. Congratulations!”

Erick was happy and grateful after the official graduation ceremony. “First and foremost, I want to thank God for giving me the opportunity to keep fighting every day,” Erick said. “Because of Him, I am still here celebrating a very special moment, not only with my friends and family but with my school, which I consider family as well.” 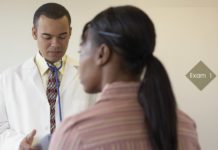