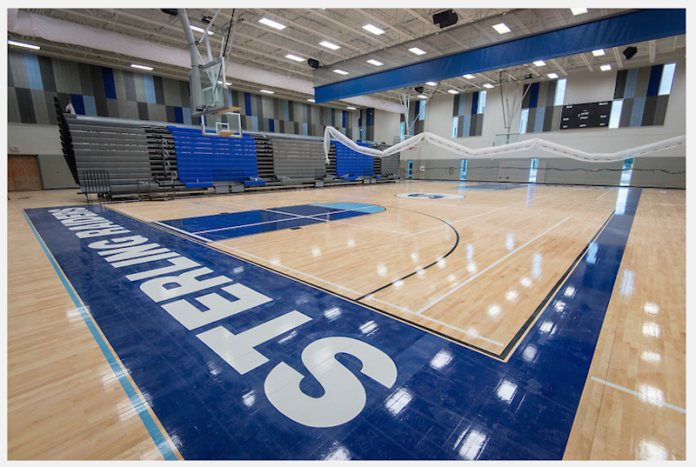 The grand building — specifically designed to enhance their aviation sciences program and support 21st century learning — has been long-awaited by the Sterling community, and it is well deserved.

“I think it’s going to mean that they’re not forgotten,” Fuentes said, describing the importance of the new building to his students and community. The feeling of being forgotten seemed reinforced as the school was labeled by the state as “Improvement Required” and lost academic programs. “Now, we have a new school, we’re no longer IR, we’re adding programs. They’re starting to see that they have value. They are valued.”

The $72 million facility is being rebuilt as part of the voter-approved 2012 Bond Program, which calls for the renovation or rebuilding of 40 schools, including 29 high schools, across the district. The 237,000-square-foot school will replace the original structure built in 1965.

With construction in its final stages, the new Sterling Aviation High School is set to officially open its doors to students on Wednesday, Jan. 4, making it the first new comprehensive high school to be completed under the 2012 Bond Program and the first to be built in the district in almost 16 years.

Teachers will report to the new school on Tuesday, Jan. 3 for staff in-service. They also will be allowed in the building for a few days in late December to set up classrooms.

“Basically, we’re prepping for the start of the second semester,” Sterling Program Manager Marvin Stone said in early December. “The contractor is finishing up the project. Soon after, we expect furniture to start arriving.”

Built to accommodate 1,600 to 1,800 students and support the latest technology, the campus features a massive airplane hangar, which serves as the centerpiece of both the school and its focus on aviation science. Lined with large viewing windows and surrounded by career and technology education classrooms, the hangar serves as a flexible learning space where students can work on airplanes and their engines — both individually and in large and small groups.

The campus also includes state-of-the-art science labs, flexible classroom spaces, and several learning commons areas, each of which serves as a sort of modern, high-tech library. Also highlighted is the school’s learning stairs, which serves not only as a staircase, but also as a flexible learning space for small groups or impromptu lectures.

Additionally, the dining commons opens to the main hallway and features flexible seating to provide space for small groups and project-based learning throughout the school day.

“Their excitement is just going to be off the charts,” Fuentes said, explaining how he expected his students to react on the first day in their new school. A grand opening ceremony is being planned for the Spring semester to celebrate and showcase the new building.

The new school was built just south of the original location. Once students and staff are moved into the new location, crews will begin Phase 2 — demolishing the original school to make way for new athletic fields and parking. The second phase is expected to be completed by the end of third quarter 2017.