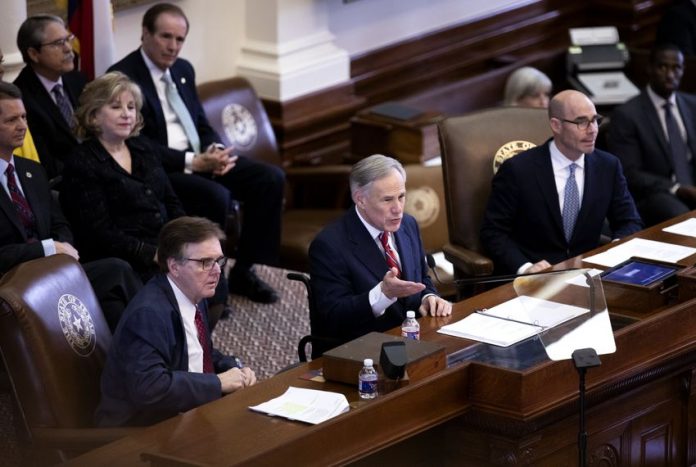 The Texas Senate on Tuesday preliminarily approved the last two bills in a package of splintered legislation aimed at limiting the ability of cities to regulate private companies’ employment policies.

The bills from state Sen. Brandon Creighton, a Conroe Republican, would preempt local rules that disallow employers from asking about an applicant’s criminal history and bar cities from enacting rules on how businesses schedule their employees’ shifts.

In 2016, Austin passed an ordinance — known as “ban the box” — preventing private employers with 15 or more employees from asking potential job candidates’ criminal history before extending a conditional job offer. At the time of passage, city officials said one of the goals was to reduce unemployment and lower the chances that people with criminal histories would reoffend. But more recently, some have slammed the city’s proposal for lacking teeth since it wasn’t being enforced.

If passed, Creighton’s bill would ensure local governments couldn’t implement such laws in the first place.

“I don’t dispute that many people are deserving of a second chance, but I do want private employers to make that decision and not the government,” Creighton told other senators. “It’s a lose-lose for both the applicant and the employer to go through a lengthy process just to learn that a felony may disqualify the applicant.”

Senate Bill 2488’s initial passage came in a party-line vote of 19-12, with only Republicans in support. It will need to get final approval from the Senate before it can head to the House.

According to the National Employment Law Project, an advocacy group that works to strengthen protections for low-income or unemployed workers, 34 states and more than 150 cities and counties have adopted “ban the box” ordinances. Some business owners and Republicans, however, have said that such laws potentially make an employer liable to their workers’ actions — should they go on to commit a crime.

When laying out his measure in early April in front of the Senate State Affairs Committee, Creighton said SB 2488 would ensure “business owners know exactly who is working in and among their employees.”

“If someone’s been convicted of embezzlement or burglary, wouldn’t you want to know that as soon as possible before you let them operate a cash register or a safe or a vault?” he said.

But State Sen. Royce West, D-Dallas, said he worried that if Creighton’s bill passed it might be hard for Texans with criminal records to get jobs.

“You believe that people who have paid their debts to society should have an opportunity to get back into society and be a functional citizen, don’t you?” West asked. “You realize that in order to be able to do that, you have to be able to get a job in order to pay child support, take care of your family and other obligations.

“You’re saying by this particular bill, they should be pre-judged during the interview process if they have a criminal record and not be judged based on the person’s ability to be able to do the job.”

Tuesday’s bills were approved after a broader piece of legislation with similar measures stalled following LGBTQ groups’ criticism that Creighton stripped out a provision that explicitly protected non-discrimination ordinances.

One of the most notable goals of that original bill, Senate Bill 15, was to prevent cities from mandating that employers offer paid sick leave to their staffs. The Senate last week passed such a measure after it was split off into separate legislation.

SB 15’s companion in the House by state Rep. Craig Goldman, R-Fort Worth, has yet to receive a committee hearing, though the language protecting local non-discrimination ordinances is still intact.

The upper chamber Tuesday approved in a preliminary vote a second measure by Creighton, Senate Bill 2486, that would prohibit cities from regulating how companies schedule employees. State Sen. Kel Seliger, R-Amarillo, successfully amended the bill so that cities also could not regulate overtime compensation.