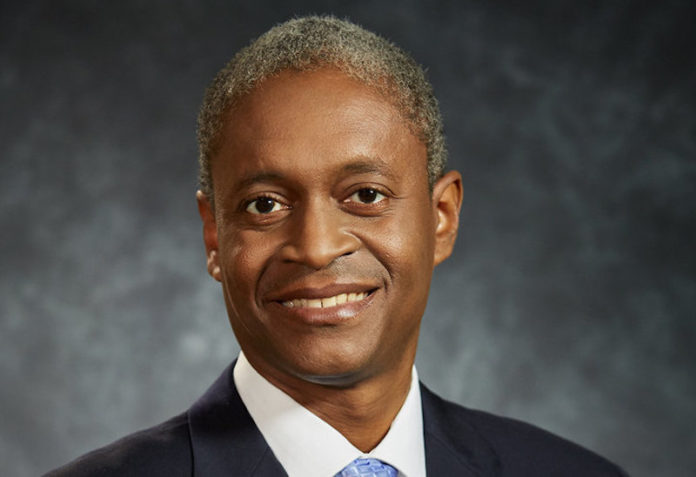 University of Southern California professor Raphael Bostic just made history by becoming the first African American to be named president of a Federal Reserve regional bank in the system’s nearly 104-year existence.

The 50-year-old was named head of the Federal Reserve Bank of Atlanta on Monday. Bostic, director of the Bedrosian Center on Governance at USC’s Sol Price School of Public Policy, said in a video statement that his appointment is “a very big deal,” according to the Los Angeles Times.

“It’s not lost on me that I … am the first African American to lead a Federal Reserve institution,” he said. “It’s kind of daunting. It’s an overwhelming thought. It’s a tremendous privilege.”

Prior to Bostic’s appointment, politicians and advocacy groups had spoken out about the lack of diversity at the Fed’s 12 regional banks. In September, four black members of Congress, Rep. John Lewis (D-Ga.), Rep. David Scott (D-Ga.), Rep. John Conyers (D-Mich.) and Rep. Maxine Waters (D-Calif.), sent a letter to Chairwoman Janet L. Yellen urging her to appoint a black or Hispanic person to the Atlanta seat.

Waters, the top Democrat on the House Financial Services Committee, described Bostic as an “outstanding choice” and applauded the Fed’s steps toward diversifying their leadership, according to the Los Angeles Times.

“Given the disparate economic experiences faced by key demographic groups, it is crucial that a broader cross-section of groups have a seat at the decision-making table,” Waters said.

The Atlanta Fed’s board chairman, Thomas A. Fanning, also praised Bostic in a video statement.

“What made Raphael our top choice for the Atlanta Fed president? His positive energy, his deep knowledge of income inequality, economic opportunity and consumer banking issues and his outstanding personal character and intellect,” he said.

Bostic, who joined the Fed as a staff economist in 1995, will also become just the fourth African American to serve on its policy-making committee. He will lead hundreds of employees including economic researchers, bank regulators and others who work the financial system.

Bostic will start on June 5, succeeding current president Dennis P. Lockhart, who reached mandatory retirement after serving 10 years. He said that he’s eager to take on the task and break a racial barrier.

“This could have happened a long time ago,” Bostic said, “but we’re happy that it happened now, and I look forward to this being a steppingstone for many others to have this opportunity as well.”