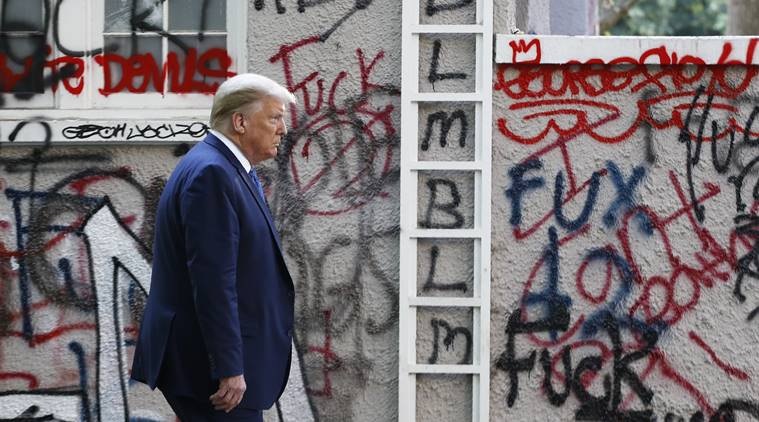 Less than five months before voters will decide his fate, President Donald Trump is confronting a vastly different political reality than he once envisioned. For starters, if the election were held today, he’d likely lose.

The president, West Wing advisers and campaign aides have grown increasingly concerned about his reelection chances as they’ve watched Trump’s standing take a pummeling first on his handling of the coronavirus pandemic and now during a nationwide wave of protests against racial injustice. His allies worry the president has achieved something his November foe had been unable to do: igniting enthusiasm in a Democratic Party base that’s been lukewarm to former Vice President Joe Biden.

Trump was facing tougher political prospects even before the death of George Floyd, the black man who died after a white Minneapolis police officer pressed his knee for almost nine minutes into Floyd’s neck last month.

COVID-19’s mounting human and economic tolls -– and the president’s defiant response –- cost him support among constituencies his campaign believes are key to victory in November. His signature rallies had been frozen for months, and his cash advantage over Biden, while vast, wasn’t growing as quickly as hoped because the pandemic put a halt to high-dollar fundraisers.

Internal campaign surveys and public polling showed a steady erosion in support for Trump among older people and in battleground states once believed to be leaning decisively in the president’s direction, according to six current and former campaign officials not authorized to speak publicly about private conversations. The campaign recently launched a television ad blitz in Ohio, a state the president carried by 8 percentage points four years ago, and it sees trouble in Arizona and warning signs in once-deep-red Georgia.

Trump aides have warned the president that the renewed national conversation about racial injustice and the president’s big “law and order” push have animated parts of the Democratic base — black and younger voters — whose lagging enthusiasm for Hillary Clinton in 2016 cleared the way for Trump’s narrow victory.

“I have polls,” Trump told Fox News Radio on Thursday, dismissing a spate of public surveys showing him trailing Biden in key states. “Just like last time, I was losing to Hillary in every state, and I won every state.”

Though outwardly confident, Trump has complained to advisers in their roughly weekly White House meetings about the perception that he is losing to Biden and has pressed his aides for strategies to improve his standing. Late last month, the Trump campaign moved two veteran political aides into senior leadership roles, reflective of an effort to bring more experience to the campaign team. And on Friday, the campaign brought on board former communications chief Jason Miller as a senior adviser as well.

The White House seized on better-than-expected economic newsFriday — the nation added 2.5 million jobs in May and the unemployment rate fell — with an over-the-top victory lap, selling it as a sign of a post-pandemic economic comeback that the president’s advisers believe will be the single most important factor in victory in November.

The campaign’s plan had been to spend the spring of 2020 trying to negatively define Biden, a strategy that went out the window when COVID-19 reached American shores. Trump’s aides have been frustrated that the pandemic has allowed Biden to largely stay out of public sight; they believe the gaffe-prone Democrat often damages himself when speaking in public settings.

Now discussions are underway for a renewed effort to attack Biden on several fronts, according to the officials. Among the lines of attack: his ties to China, which the White House blames for the spread of the pandemic; Hunter Biden, the vice president’s son, whom aides believe can be painted as a symbol of corruption; and Biden’s support for a 1994 crime bill, which Trump says helped create conditions that have led to the unrest in American cities.

“A lot of Americans know of Joe Biden, but not too many know Joe Biden. And our job is to educate voters about the real Joe Biden,” said Trump campaign communications director Tim Murtagh. “He’s sided with the rioters. He’s barely made a passing reference to all the violence that happened. Black Americans care about safe communities, too.”

Driving up Biden’s negative ratings is an imperative for the Trump team: It sees little it can do to increase the president’s own favorability numbers, which have been stubbornly underwater since Trump took office. In 2016, Clinton’s negative favorability ratings were nearly as high as Trump’s, and voters who disliked both candidates largely broke for Trump. But those same type of voters, at least for now, favor Biden this time around and the former vice president is viewed more favorably by the public.

“The Trump campaign keeps calling the same play, talking a big game and then getting smoked on the field,” said Biden campaign spokesman TJ Ducklo. “The Trump Campaign and their Super PAC have spent nearly $20 million attacking Biden since April 1, and they have watched Trump steadily decline in the polls.”

Trump has tried to adjust to the new reality in which packed rallies are prohibited by social distancing requirements. He’s been scheduling taxpayer-funded official trips to battleground states to highlight his leadership during the pandemic. Friday’s trip to Maine was the latest White House visit doubling as a campaign stop, following others to Michigan, Pennsylvania, Florida and Arizona.

But Trump has been hankering for a return to his old mainstay, so much so that he yanked the public-facing parts of the Republican National Convention from North Carolina, casting doubt on millions of dollars of commitments and more than a year of planning. Now the boring business of the convention will remain in Charlotte, but the celebratory aspects will shift to a to-be-determined city that will allow Trump to put on the show he desires.

While Trump has demanded that the campaign prepare to schedule rallies as soon as the summer, aides have cautioned that it could be risky to fill an arena — creating the potential for negative news stories if the virus were found to have spread at a campaign event. And that is if they could even persuade the requisite crowds to gather before there is a vaccine.