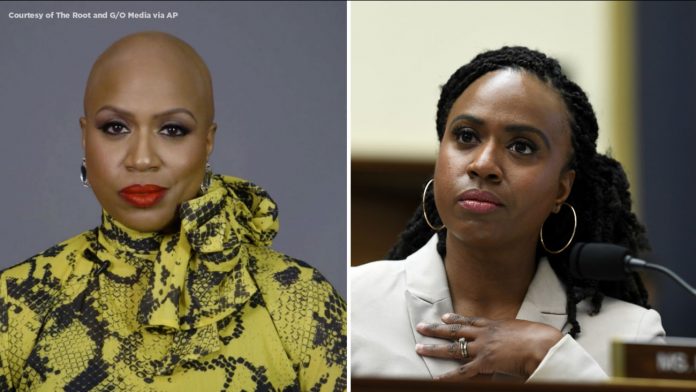 Rep. Ayanna Pressley (D-Mass.) opened up about the struggles she faces with alopecia, a condition that can cause hair loss, in a new interview in which she also revealed her bald head for the first time in public.

The freshman Democrat revealed in an interview with The Root, which dropped on Thursday, that she first began noticing patches in her hair back in the fall.

“In the fall, when I was getting my hair retwisted, is the first time that I was made aware that I had some patches,” Pressley said. “From there, it accelerated very quickly.”

The congresswoman said it eventually got to a point where she had “been waking up every morning to sinkfuls of hair.”

“Every night I was employing all the tools that I had been schooled and trained in throughout my life as a Black woman because I thought that I could stop this. I wrapped my hair. I wore a bonnet. I slept on a silk pillowcase,” said Pressley, who in 2018 became the first black woman elected to Congress from Massachusetts.

“And yet and still every morning, which I faced with dread, I did not want to go to sleep because I did not want the morning to come where I would remove this bonnet and my wrap and be met with more hair in the sink and an image in the mirror of a person who increasingly felt like a stranger to me,” she continued.

Pressley said that the “last little bit” of her hair fell out the day before the House voted to impeach President Trump last month.

“I was completely bald. And in a matter of hours, was going to have to walk into the floor [of] the House Chamber … and cast a vote in support of articles of impeachment,” she recalled. “And so I didn’t have the luxury of mourning what felt like the loss of a limb. It was a moment of transformation, not of my choosing.

“But I knew the moment demanded that I stand in it and that I lean in,” she continued. “And I exited the floor as soon as I could and I hid in a bathroom stall. I felt naked, exposed, vulnerable. I felt embarrassed. I felt ashamed. I felt betrayed.”

Pressley said in the video that she has gotten to a place where she is “making peace” with the condition, though she added she has not arrived at that point just yet.

“I’m very early in my alopecia journey. But I’m making progress every day. And that’s why I’m doing this today,” she said. “It’s about self agency. It’s about power. It’s about acceptance. It’s so interesting to me that right now on this journey, what I feel the most unlike myself is when I am wearing a wig. So I think that means I’m on my way.”

Toward the end of the interview, Pressley added that she has been experimenting with several hair units in the meantime, one of which she nicknamed “FLOTUS” because it feels very “Michelle Obama” to her.

She nicknamed the wig she wore in the interview “the OG,” which she explained, smiling, “because this was the first one.”

“I’m trying to get to a place where I give myself the space to be, to find joy in options,” she said.