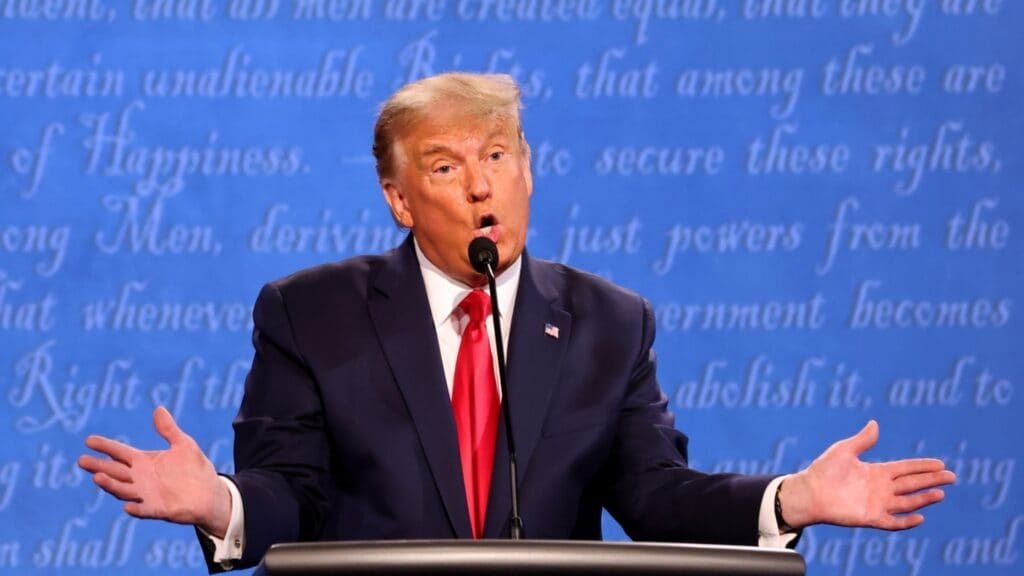 ‘He pours fuel on every single racist fire,’ Joe Biden countered in his response to Trump.

During the final presidential debate last night in Nashville, President Donald Trump declared himself the “least racist person in this room.”

His opponent, former Vice President Joe Biden, declared that the opposite was true.

The comments came after moderator Kristen Welker, who is Black, asked questions on the subject of race.

She asked the president about comments in which he called the Black Lives Matter movement a “symbol of hate.” She noted that Trump had retweeted a video of supporters chanting “White power.”

“You’ve said that Black professional athletes exercising their First Amendment rights should be fired,” Welker said, referring to the comments Trump has made about expressive sportsmen like activist quarterback Colin Kaepernick and Los Angeles Laker star LeBron James. “What do you say to Americans who say that language, from a president, is contributing to a climate of hate and racial strife?”

In his response, Trump claimed that the first time he ever heard of Black Lives Matter, “they were chanting, ‘Pigs in a blanket,’ talking about police.”

The phrase referred to one Minnesota rally in 2015 in loosely affiliated with the movement, where “Pigs in a blanket, fry ‘em like bacon” was briefly chanted. The phrase has never been captured at another protest, however, video of that lone rally is often replayed on Fox News.

Trump then pointed to what he calls several accomplishments, including an executive order on criminal justice reform.

In his response, Biden said, “Abraham Lincoln here is one of the most racist presidents we’ve had in modern history,” sarcastically referring to the fact that Trump often says — and did again Thursday night — that he’s done more for Black people than any other president save for Lincoln.

“He pours fuel on every single racist fire,” Biden said.

Trump then brought up the 1994 crime bill, which Biden supported as a Delaware senator, legislation that has been blamed for increasing the incarceration of Black men. The former vice president said the bill had widespread support back then amid a crack cocaine scourge, but times have changed.

“It was a mistake,” Biden admitted. “I have been trying to change it since.”