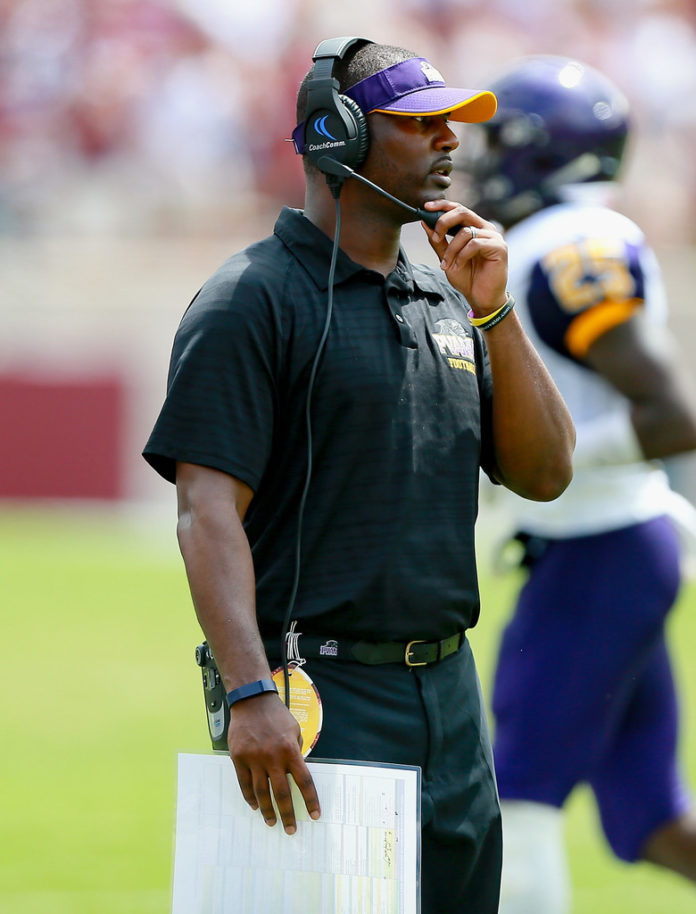 It has been a tough year for Coach Willie Simmons and the Prairie View A&M University Panthers. The team has a 3-3 record in SWAC competition and sits in third place behind Southern and Grambling in the extremely tough West Division of the SWAC conference.

Despite the hardships of the season, the Panthers show no signs of quitting and erupted for a record-setting performance recently at home against Arkansas Pine Bluff.

The Panthers’ vaunted offensive attack was on full display recently defeating UAPB 35-12 on Senior Day and Military Appreciation Day. Wide receiver Khadarel Hodge had the type of day that players dream about in the contest.

Hodge’s receiving yards total broke one of the oldest PVAMU football records of all time, as the single-game receiving yards mark had stood since 1964. PVAMU Sports Hall of Famer and AFL great Otis Taylor had 198 receiving yards in one game more than 50 years ago.

“I just want to thank God and my teammates, especially Neiko who gave me the ball when I asked for it,” Hodge said. “He did a good job of going through his progressions. I woke up this morning feeling like it was going to be a big day. I didn’t’ know I was having that kind of day, and I’m definitely blessed. It’s definitely a way to be remembered here in my last game at Panther Stadium.”

Hodge had touchdown receptions of 70 and 17 yards, and a career-long 88 yards, the latter being the play that set the record. To say that Hodge has been on a hot streak is a major understatement.  In the last six games, Hodge has caught 30 passes for 644 yards and 10 touchdowns, and has at least one touchdown catch in every game during that stretch.

“Khadarel has been playing at elite level for the last month or so,” Simmons said. “The ball just seems to find him. The way he practices shows up in games, I’m proud of him, and hopefully the other guys learn from the way he works and how it shows up on game day.”

Simmons was quick to add that the win was much more than a two-man effort.

“I thought our team performed extremely well in all three phases,” Simmons said. “We had some great individual efforts today. Neiko threw for more than 400 yards. Khadarel broke the single-game record for receiving yards. Sta’Fon [McCray] had another 100-yard rushing game, and would have had more without some untimely penalties.

“The defense kept them out of the end zone until the last drive. I tip my hat to those guys. They gave great effort, and paid great attention to detail this week. It was about time to put one of these type games together.”

The Panthers wrap up the 2017 season on Saturday, Nov. 25 against SWAC rival Texas Southern University at BBVA Compass Stadium. Kickoff is at 6 pm.