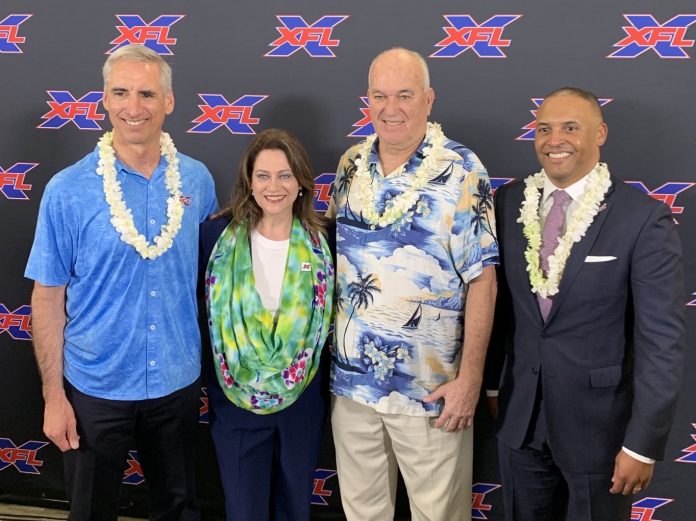 The Houston franchise of the new XFL spring professional football league introduced June Jones as the head coach and general manager of the yet unnamed team. Brian Michael Cooper is the team president.

The XFL kicks off in February 2020.  The inaugural season will launch with teams in Houston, Dallas, Los Angeles, New York, St. Louis, Seattle, Tampa Bay and Washington, D.C. The league is owned by WWEchair Vince McMahon.

Jones, 66, is familiar to some local football fans. He was receivers’ coach for the USFL’s Houston Gamblers and quarterbacks’ coach for the Houston Oilers. Cooper is a formersenior associate athletic director at Rice University and president of the Houston Rockets NBA G-League Rio Grande Valley Vipers.

Jones was known early in his career as an offensive innovator who specialized in the run- and-shoot offense. He did impressive work in two previous stints in Houston.

Jones spent three years as head coach of the Falcons, leading them to the playoffs in 1995 and getting fired after going 3-13 in 1996. He also spent 10 games as interim head coach of the Chargers. He spent the last two years as offensive coordinator of the CFL’s Hamilton Tiger-Cats. He was a college head coach at Hawaii and SMU.

“June has coached the game in three different pro leagues, including the NFL, as well as major college and high school football. The experience he’s gained at every stop along the way will no doubt serve him well as he helps us reimagine the game and build our Houston team into something special.”

“I’ve spent a few years coaching in Houston, and having a chance to return to be a head coach in the XFL is an opportunity I couldn’t pass up,” said Jones. “I had a really great time coaching in the CFL, but this new fresh opportunity to build a team from the ground up is extremely rare in this game, and I’m looking forward to working with Brian Cooper and our coaches to give football fans in Houston a team that’s truly exciting to watch and worthy of their support.”

Cooper will handle the business side of the Houston franchise.Jeffrey Pollack, XFL president and chief operating officer, described Cooper as “a seasoned sports business leader who knows and loves Houston and will help us connect authentically,”

“It’s an honor to help launch the XFL’s team in Houston,” said Cooper. “One measure of our success will be how well we engage the community. Another measure will be how effectively we tap into Houston’s passion for football. In both instances, I look forward to planting firm roots for the XFL by building a passionate, loyal fanbase for our Houston team.”

Cooper has 20 years of experience as a sports attorney, agent, executive and advisor. He most recently served as a partner in the Houston and Denver offices of Lewis Brisbois Bisgaard & Smith LLP and as a member of the firm’s entertainment, media and sports practice.

He will be responsible for the team’s fan engagement and business operations, including ticket sales, corporate partnerships, marketing, content, communications, community relations and the game-day experience.

Each XFL team will compete with a 45-man active roster over a 10-week regular season with a postseason consisting of two semifinal playoff games and a championship game. XFL games will be nationally televised on ABC, FOX, ESPN and FS.