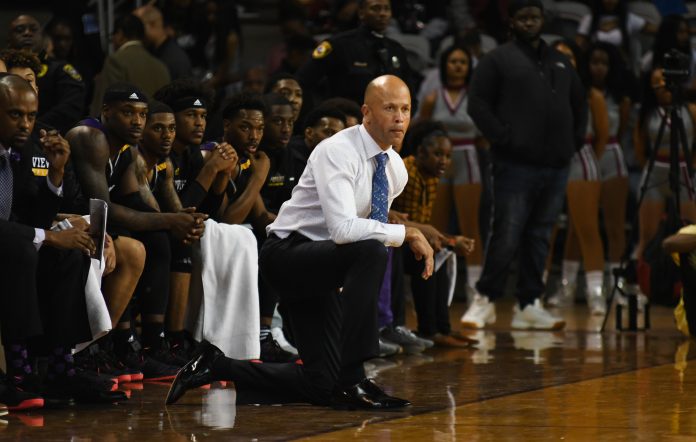 The Southwestern Athletic Conference (SWAC) men’s basketball race is entering the second half of play. With eight games to play on the conference schedule, schools are jostling for position and seeding in the upcoming conference tournament.

At the top of the hill thus far in the standings are the Prairie View A&M University Panthers. Selected to finish fourth in preseason polls, coach Byron Smith’s Panthers have been dominant in conference play, rolling off nine consecutive wins before losing for the first time recently against Texas Southern University 95-90.

The Panthers hold a two-game lead over second-place TSU in SWAC. Grambling, Jackson State and Alabama State are all knotted in third place, three games back.

The way the Panthers have performed to date one has to wonder how they could have been overlooked by the forecasters. Smith offered an explanation.

“You don’t measure teams in October,” he said. “We went through a very difficult non- conference schedule. I expected us to move the needle quickly and to be able to do some things in a positive way. I didn’t know we would be as dominant as we have been, but I knew we would be more than just an average team in the league.”

Being No. 1 means playing every game with a bullseye on your back. The Panthers squandered a 20-point lead to TSU on the road.

“We lost our focus, let it get away from us, started celebrating a little too soon, thought the game was over,” Smith said. “It’s a great learning experience. It shows that no lead is ever safe. I think we’ll learn that you have to learn how to deal with success. If I know my team like I think I do, they’ll use it in a positive way and come back and get ready for a very tough road trip against Jackson State and Grambling.”

In his second season as the Panthers top cat, Smith is playing not only for success this season, but hopes to lay a foundation for a thriving program for years to come.

“It’s been a lot of hard work, a lot of hard practices, lifting, one day at a time,” Smith continued. “We’re not looking at what we’re doing this year as a Vanilla Ice, a one-hit wonder. We’re looking to be solid for the years to come. That’s the goal for Prairie View men’s basketball.”

“Our guys were down about 20 points and they continued to fight in the second half,” Jones said. “A win like this gives them the mindset that regardless to what game we’re in, you have to continue to play the game.

“It also is the first game of the second half of conference against a very tough opponent in Prairie View who happens to be the top team in our conference,” Jones said. “It draws us a little bit closer in conference play.”

As the Tigers head into the second half of the season, Jones acknowledged areas in which his club needs to improve.

“We have to do a much better job on the defensive end of the floor,” he said. “We gave up 50 something points to Prairie View in the first half. We have to hold our opponents under 50 percent shooting. We also need to do a better job executing our offense and being poised under pressure.”