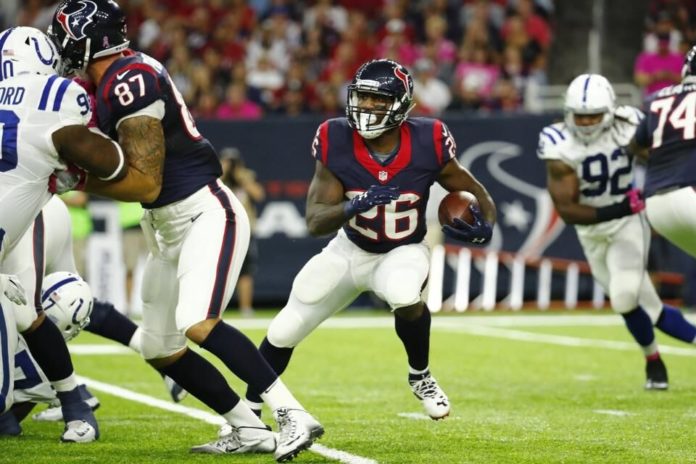 Raise your hand if you’ve seen this scenario before. The Texans are playing a quality opponent in primetime, which normally translates to an embarrassing loss. They’re playing a Sunday night game against perennial division nemesis Indianapolis and Houston native, Colt QB Andrew Luck is having his way. Before you write your team off, know that this story has a happy ending. The Texans rally late in the 4th quarter and capture a signature win in overtime.

To say the team snatched victory from the jaws of defeat, is a cliché that has never been more accurate. Down 23-9 with 7:12 left in the game, the Texan’s offense suddenly came out of its funk and started to click. Brock Osweilder got hot and Lamar Miller ran roughshod over the Colt defense. Meanwhile Jadeveon Clowney, Whitney Mercilus and Benardrick McKinney led a determined defensive attack resulting in a surprising 26-23 overtime win.

A come-from-behind win, in prime time to solidify your grasp on 1st place in the AFC South division should be a watershed moment for the team, right Bill O’Brien?

“We battled hard. It’s a division rival and it was great to see our players’ resiliency and their ability to come back no matter what, says a lot about the guys on this team,” Coach O’Brien said.  “But again, it’s 4-2 and there’s a lot of season left. We watch the tape. We correct what we need to correct. Keep doing the things well that we’re doing well. Figure it out. Try to put a good game plan together for a very, very difficult Denver team.”

“We talked about it coming into this game; this kind of game can make or break you. The way it turned in the second half, that just showed so much to me about the guys that we have in this locker room,” Brown opined. “Just, kind of like I said, the grit, the resiliency that we have in this locker room it means a lot. And I think, with that kind of attitude, of course we have a lot of things we want to fix and clean up, but with that kind of attitude, having that kind of heart, I think we can do some great things.”

A positive sign that fans hope is an indicator of good things to come was the offensive productivity of the run game featuring Lamar Miller. Miller rushed for a season high 149 yards on 24 carries, averaging 6.2 yards per attempt. As usual Miller passed the praise on to his offensive line and downplayed his play.

“I think we were just clicking. I think the offensive line did a great job of giving me creases. I was just trying to take advantage of my opportunity to make plays when my number was called and just try and win the game”

After a horrible three quarters of play, QB Brock Osweilder finally got the Texans offense in gear. Osweilder believes a comeback; OT win like this can help shape a team’s identity.

“I think this game will be huge for us going forward,” Brock shared. “Coach mentioned to us during the week that there kind of comes a point in October, early November, when you have to decide what kind of team you want to be and what kind of identity you want to have as a team. I think we showed our identity tonight. Will the game be perfect? Probably not, but I promise this team will fight 60, 60 plus minutes, for that matter, no matter how the game goes.”

The Texans, with a record of 4-2 sit alone at the top of the AFC South. They travel to face the world champion Denver Broncos this week. It will be another prime time matchup on Monday Night. Hopefully the Indy win will finally cure the team of its prime time stage fright.