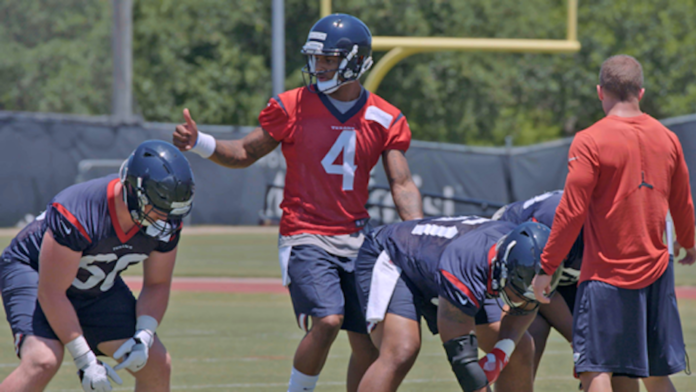 When you have a draft class that experts believe is your franchise’s best in recent years, you can’t wait to get those prospects on the field and examine what you’ve acquired. Such is the case with the Texans, who recently held their rookie mini-camp for some 44 draft picks, undrafted college free agents and tryouts.

Most NFL draftniks gave the Texans an “A” for their recent selections, starting with Clemson quarterback Deshaun Watson, their first-round pick. Rookie mini-camp is the first step of indoctrinating players with the NFL method of doing things. Head coach Bill O’Brien described the process.

“They arrived here Thursday afternoon and we started to meet with them right away. It was kind of individually,” O’Brien said.

“They had to take physicals and things like that but then we started to meet with them. Then, at 7 o’clock on Thursday night we had a squad meeting and we started to talk about the weekend and the expectations of this organization,” O’Brien said.

“Then, we had an offense/defense meeting that night. It’s been a lot of meetings. So, it’s meetings, it’s walk-through, and it’s practice. Everything is brand new to them. [They want to know everything from] ‘Where’s my meeting room, and where do I get taped?’ to how we practice and where the practice fields are.

“Everything is brand new. As quickly as they can get adjusted to all of the little things, they’ll be in good shape. They’re a competitive group. We’re really enjoying working with them.”

“It’s just a different environment,” Watson said. “This is the NFL. College is a different level but this is the National Football League. It’s your job, it’s your career. The things you do are different than what I’ve been doing before.”

As Watson settles in to his new surroundings, he is keenly aware of what it will take to duplicate the success that he enjoyed at Clemson on the professional level.

For Texas City native and University of Texas All-American running back D’Onta Foreman, beginning his pro career less than an hour from his hometown is special.

“My dad was a big Houston Texans fan and I watched the team growing up,” Foreman recalled. “[It’s] unreal, me being a part of it. I just want to get in and do what I’m asked to do and just take it all and embrace it all.”

Fourth-round draft pick Julien Davenport, an offensive tackle, arrived at rookie mini-camp with the distinction of being the first player drafted out of Bucknell University in Lewisburg, Pa. in 60 years. Coming from a smaller school, Davenport is prepared for the next level of competition.

“[It’s] definitely a big honor but now I’m a Houston Texan and it’s time to work toward attaining these goals and getting that ring,” Davenport said. “Anywhere I go I’m real competitive. I want to be the best. I want to go against the best and I’m always carrying this chip on my shoulder.

“I’m always ready to compete,” Davenport said. “I’m looking forward to going against anybody that lines up against me and continuing to develop my game and be the best person I can be.” 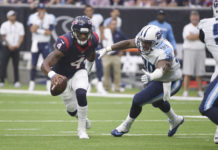