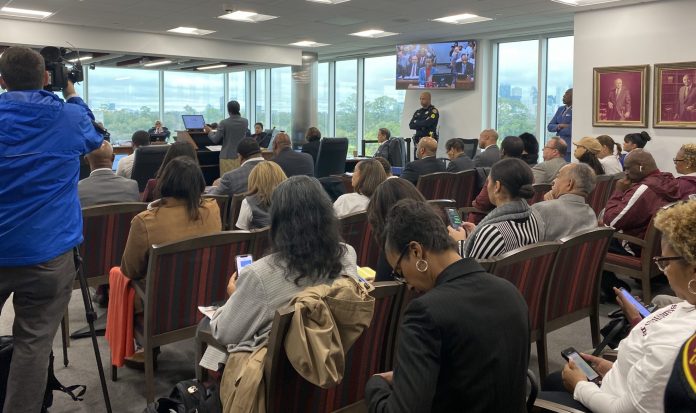 The Texas Southern University board of regents has finalized a decision to fire its president, Dr. Austin Lane, buying out the sidelined president’s contract after a 13-hour mediation.

The drama has had TSU alumni, students, faculty and staff at odds for weeks. During a regularly scheduled board meeting, regents voted to part ways with Lane without any claim of wrongdoing on his part, a change from the process they began earlier this month, when they announced his termination because of ” failure to act on or inform the board about fraud allegations involving a former law school official.” That claim was one Lane refused to take lightly. And after a mediation on Monday, the two sides were able to come to terms, with the board agreeing to buy out the remainder of Lane’s contract and acknowledge that he had done nothing wrong.

“I wish the best for Dr. Lane and his family, but it’s time to move on. We need to do the business of this university,” said board member Albert Myres.

Dr. Lane wasn’t present at the meeting, but issued a written statement.

“Our last four years have been the best four years of our lives,” Lane said. “TSU will always be the heart and soul of Houston and will forever have a special place in our hearts. With your input, recommendations, and support, we were able to do great things in a very short period of time.”

Lane went on to address some of his accomplishments, which included increased enrollment, safety enhancements, the construction of a new 100,000 square-foot library and improved graduation rates as the school’s top accomplishments since he became president in 2016.

The decision was met with disdain from alumni who packed the boardroom in #IStandWithLane t-shirts, many of whom had been waging a social media campaign to reinstate Dr. Lane.

“This is very disheartening. But we’re not through with our fight,” said alumnus, Karla Brown. “We’ll change our goal now to get rid of the board. I think we need to get a new board, then reinstate our president.”

The terms of Lane’s buyout were not revealed, nor were his future plans.