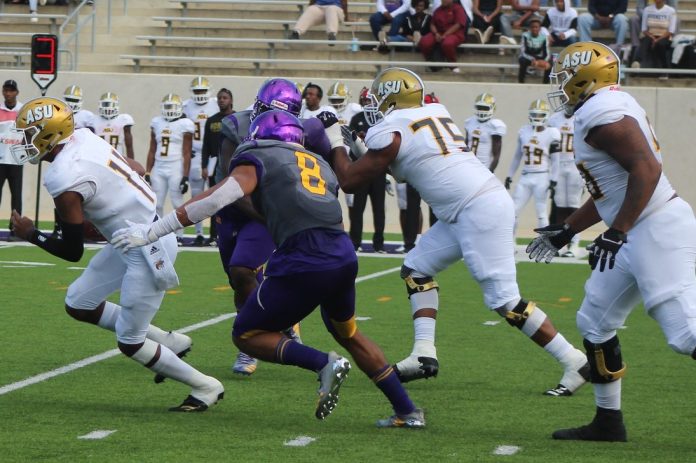 The NFL draft is like Christmas time for league franchises and anxious players. Prairie View A&M University defensive end Quinton Bell received the call he had been waiting a lifetime for telling him he was drafted into the NFL.

Bell, a Long Beach, Calif. native, was selected by the Oakland Raiders in the seventh round, 230th overall. He is the first Panther drafted since 1980. Ironically, Quinton’s uncle, running back Nick Bell, was a second-round pick by the Raiders in 1991.

For Quinton Bell, the weeks since the draft have been the fulfillment of a dream.

“It’s been such a long tough road to get where I am now,” Bell said. “I’m honestly just blessed. All my hard work has paid off. The last few weeks have been life-changing. It still feels like I’m dreaming.”

What makes the dream so surreal is that Bell was recruited to PVAMU as a wide receiver. At 6-feet-4, 225 pounds, Bell thought his ticket to fame would be on the offensive side of the ball. Everything changed when the PVAMU defensive coaches decided to switch him to defense.

“D-line coach Todd Middleton approached me first. I didn’t think he was crazy, but I definitely thought he saw something that I didn’t see at the time,” Bell recalled. “I was shocked he didn’t say something like safety or linebacker – he said defensive end.

“I immediately thought about battling big boys in the trenches, that wasn’t real appealing. I had a meeting with the defensive coaches and we talked about my potential and the path that would give me a shot at possibly playing in the NFL.”

“At a point in the meeting they asked me, ‘How many touchdowns did you catch last season?’ [The answer was] none. Then they asked, ‘How many your whole career?’ [The answer was] one or two. They convinced me that with my athletic ability I could be a difference maker on defense. I really had nothing to lose. Three years at receiver with no real success versus this new challenge on defense. I accepted the challenge.”

In hindsight, Bell believes the move to defense was an answered prayer.

“After three years at PV and limited success at receiver the feeling had creeped in that I couldn’t ever reach my goal of playing on the next level,” Bell said. “I prayed to God for a change, something that would wake me up and renew my passion for the game and help me get where I wanted to be.

“When the opportunity to switch to defense came I thought this was God answering my prayer and I didn’t want to miss this blessing. I looked in the mirror and challenged myself. ‘You have one year to prove yourself. What you going to do?’”

In his only season at defensive end Bell led the Panthers with 7.5 sacks and was a second team All- Conference performer on defense.

Bell was not invited to the NFL Scouting Combine, but he put on a show at his pro day performance at PVAMU.

Now a chisled 240 pounds, Bell ran a 4.48-second 40-time, which would have been tied for the 10th-fastest time at the combine. He also had a vertical jump of 41.5 inches, which would have been tied for sixth-best in Indianapolis. Bell also benched 225 pounds 23 times and cleared the 12-foot-long tape on the broad jump, but fell backward to scratch, before registering an 11-4.

“His athleticism is eye-popping,” Oakland coach Jon Gruden said. “He’s just a novice at the position, so he’s got a lot to learn. Quinton Bell is interesting.”