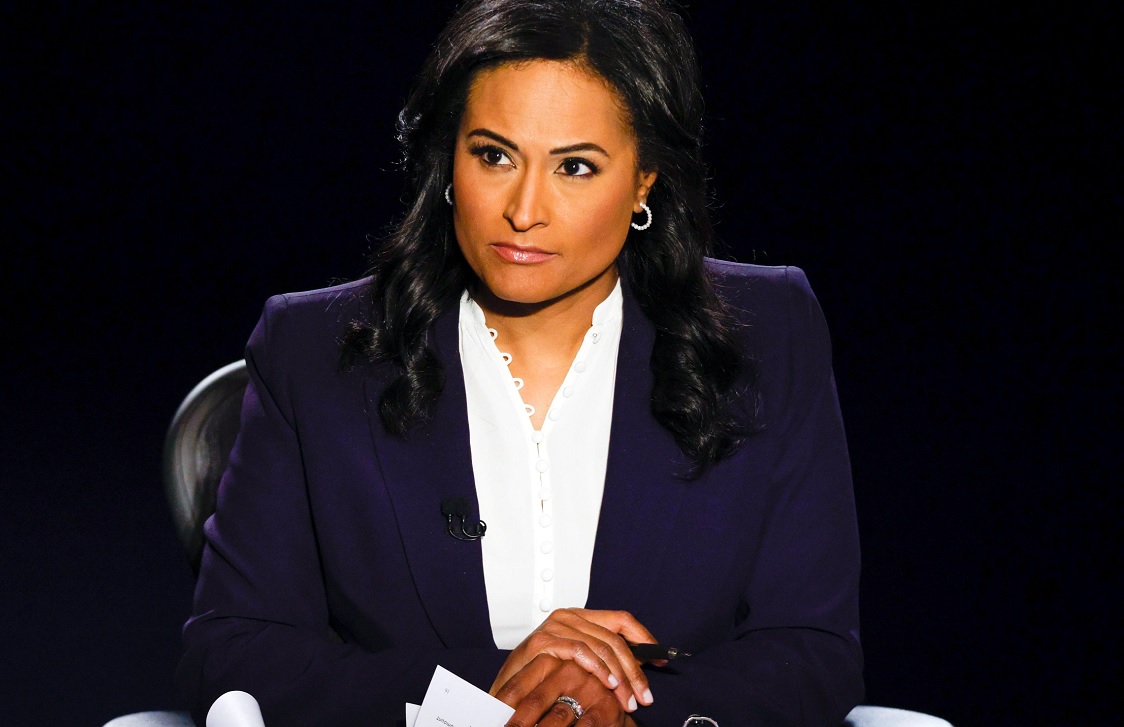 Kristen Welker on Thursday night emerged a the real winner of the final presidential debate between Joe Biden and Donald Trump as the moderator managed to calmly keep control of the conversation while directing it with an unflappable precision that even prompted the president to offer her a compliment.

The NBC News White House correspondent, who became the first Black woman to moderate a presidential debate in nearly 30 years — handled herself with a firm grace that seemed to help keep the candidates in line and on-pic (more so than their first debate, at least). She expertly weaved pressing themes into her line of questioning and strictly enforced speaking limits for each candidate without anyone having to resort to the infamous “mute” button that producers threatened to use if Biden and Trump interrupted and talked over each other.

Great job by Welker so far, she’s doing exactly what she should be doing.

Welker did have a few testy moments with Trump — he appeared to mispronounce her name as Kirsten at one point — but that is something that has all but become par for the presidential course during this administration, so it was likely something she was expecting to have to deal with.

Kristen Welker on people in need of funds from stalled COVID-19 relief bill: “Mr. President, why haven’t you been able to get them the help they need?”

“Because Nancy Pelosi doesn’t want to approve it,” Pres. Trump replies. “I do.”

“But you’re the president.” #Debates2020 pic.twitter.com/HcWibVUIr8

For instance, when Welker asked about election security after it was reported that Iran and Russia have already been interfering with this electoral season, Trump deflected and accused Biden without proof of accepting millions of dollars from foreign interests.

A tip of the Stetson to Kristen Welker. A consummate pro on a big and difficult stage.

“I have not taken a penny from any foreign source ever in my life,” Biden said, challenging Trump to release his tax returns as proof he doesn’t get paid by Russia and China.

Any lip readers in our mentions? What does Trump say to moderator Kristen Welker here?#Debates2020 pic.twitter.com/ErAct0FAbK

Welker saw an opening left ajar by Biden and used the opportunity to press Trump about his claim that his accountant was preventing him from releasing his taxes.

“Excuse me,” he shushed Welker who was simply doing her job and moderating the debate.

But that was the lone instance of a question veering off-topic without Welker able — or willing — to steer it back on track. Instead, she keyed in on Trump’s relentless attacks on Biden’s family’s alleged foreign affairs and asked the president whether it was a conflict of interest for him to maintain a “secret” bank account in China.

Welker: People of color are getting sick living near oil refineries and chemical plants
Trump: They have jobs … and everyone has inexpensive gasoline#Debates2020 pic.twitter.com/iZ17NBdB2N

Welker, staying on China, then asked Trump — who has threatened revenge against the Asian country for purportedly being responsible for the coronavirus pandemic — what exactly he would do to get them back.

But after Trump offered a non-answer that veered back off-topic to attacking Biden’s family, Welker quickly moved on to North Korea before getting to the contentious topic of healthcare. As Trump offered the vague promise to deliver “a brand new beautiful healthcare,” Biden countered by insisting the president, in fact, had no plan to replace the Affordable Care Act, which he’s spent the better part of his first term trying in vain to repeal.

“So far, I respect very much the way you’re handling this,” Trump told her out of nowhere.

But then he promptly took a swipe at Biden on fracking when he was supposed to be addressing healthcare, again, something for which he has no plan.

So Welker quickly moved on to discuss the nation’s unemployment crisis — a byproduct of the pandemic for which Trump is widely faulted — before addressing the national immigration policy that separated families at the border and locked children up in cages, more than 500 of whom are at reportedly risk of never being reunited with their parents.

Welker asked Trump point-blank three different times what his plan was to reunite the children with their families, a question to which the president barely — and reluctantly — managed to say, “we’re working on it.”

Welker was also tough on Biden at times, including when she asked him how Americans could trust him to steward an effective immigration policy when Barack Obama‘s administration was responsible for deporting more than 5 million undocumented immigrants.

Trump: “They are so well taken care of.”

Note: Even “well taken care of” kids are still separated from their parents & a number are with strangers.

Welker also made sure both candidates addressed the topic of race, even when Trump attempted to wriggle away from the line of questioning. She brought up “the talk” that many Black parents have with their children warning them of the harshest racial realities of society and called out Trump for describing Black Lives Matter as “a symbol of hate” and retweeting a video of a white supremacist.

“I am the least racist person in this room,” Trump said without any hint of irony in his voice.

Also, can we take a second to acknowledge that Trump said to Kristen Welker… A BLACK WOMAN … that he’s the least racist person in the room #Debates2020

Ignoring that obvious lie, Welker switched to Biden’s involvement with the infamous 1994 crime bill. Biden called it “a mistake” and repeated his calls for treatment for people arrested who have drug or alcohol problems.

As the debate wound down, Welker introduced the topic of climate change as the candidates kept taking shots at each other.

“Gentlemen, we’re running out of time,” she said sternly.

And they listened and fell right back in line.

Praise was being lavished on Welker for her performance.

“I’d like to congratulate Kristen Welker on her tremendous job moderating this debate as only the second Black woman to do so since Carole Simpson more than 20 years ago,” Glynda C. Carr, President and CEO of Higher Heights, said in an emailed statement. “Kristen asked smart, pointed questions to both candidates, charging them to provide direct answers to the questions on race, racism and justice that are keeping Black women up at night. We applaud Kristen and encourage the Commission on Presidential Debates to not let another two decades pass before another Black woman is afforded the same opportunity.”

“Kudos to Joe Biden and to moderator Kristen Welker for showing respect for the American people in the way they addressed the issues that really matter in this election, like health care, the pandemic, and our national reckoning with racial inequity,” Jealous said in part of a statement emailed to NewsOne.

Trump spent the past few days lobbing attacks at Welker, including calling her everything from “extraordinarily unfair” to “a radical left Democrat, or whatever she is” who is “no good.”

“Kristen Welker. She’s a radical Democrat. She deleted her entire account. But I’ve known her, she’s been screaming questions at me for a long time. She’s no good.” — Trump disses the moderator of the upcoming presidential debate pic.twitter.com/RG4gV2r10Z

The constant attacks against Welker seemed to suggest that Trump was preparing for the worst in his second and final debate against Joe Biden. After the debacle of a first debate — during which Trump frequently interrupted Biden and hardly let him get a word in edgewise even though he kept running over his allotted time periods to speak — organizers decided to implement a function that would allow them to mute both candidates if they speak for too long or try to interrupt.

We all know that Trump doesn’t like to be silenced, but especially by a Black woman. The president’s attacks on Black women — including and especially those who are members of the media as well as elected officials — have been well-documented. Welker likely prepared herself for such unprovoked attacks that we’ve seen Trump launch against PBS NewsHour White House correspondent Yamiche Alcindor, April Ryan, the White House correspondent and bureau chief for American Urban Radio Networks, and Jemele Hill, a journalist with the Atlantic. 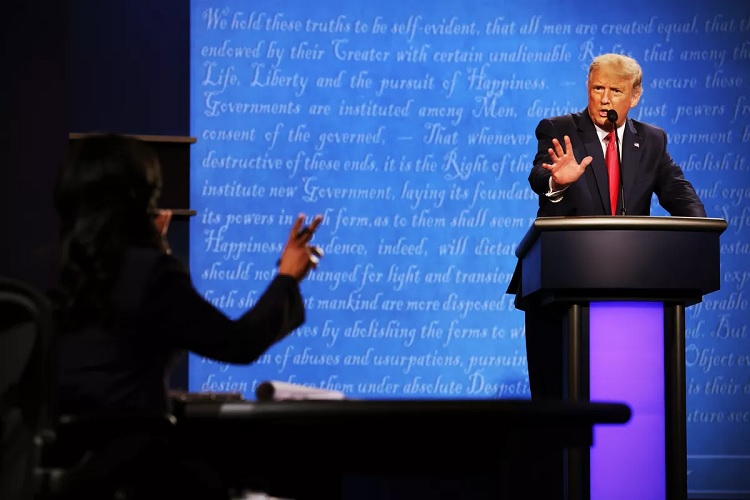 The debate was being held just 12 days ahead of the election as Biden was maintaining a double-digit lead over Trump according to most polling. But nothing was promised in key battleground states like North Carolina and Florida, where the candidates are running just about even to each other.

The debate was largely seen as an opportunity for Trump to try and make up some of that ground by having a civilly engaging Biden, who pundits have said it’s his election to lose.