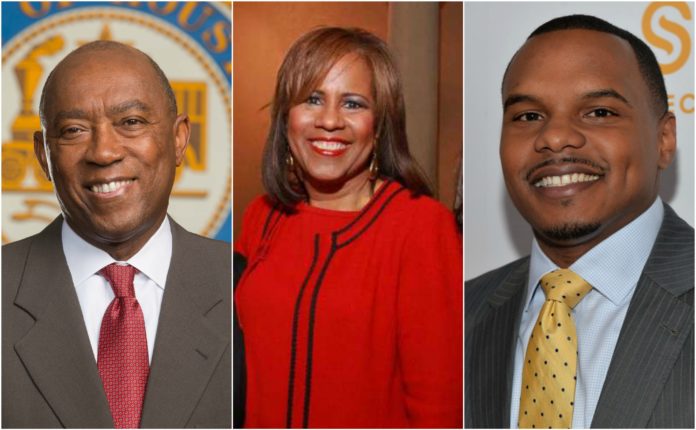 As people around the world prepare to ring in a new year, many notable Houstonians, including elected officials, community leaders and celebrities are reflecting on the lessons they learned in 2016 and vowing to accomplish more for 2017.

For some, their 2017 resolution is to embrace change, release negative baggage and build bridges to create more opportunities.  Meanwhile, others hope to make personal changes that will lead to spiritual growth, prosperity and peace.

Mayor Sylvester Turner, who is completing a challenging first year in office as he juggled a multitude of priorities like pension reform, homelessness and balancing the city’s budget, says his resolution is to keep fighting to make Houston inclusive. The mayor says he “plans to do everything in his power to build complete communities so we are not a city of haves and have not’s.”

As for his New Year’s tradition, Mayor Turner says he plans to go to dinner with his family and very close friends, followed by attending church service.

Newly Elected Harris County Tax Assessor Collector and Voter Registrar Ann Harris Bennett was swept in to office along with more than a dozen fellow democrats who are promising to shake up Harris County government and be more responsive to average people.

“New Year’s Day is a wonderful start to a new chapter in everyone’s life, “Harris-Bennett said. “As 2017 begins, I hope to learn from my mistakes, try new things and trust in others.  Finally, I plan to embrace the challenge of serving Harris County and every citizen to the best of my ability.”

We asked other Houstonians to share their 2017 goals and resolutions

I think 2017 will be a great year to make a difference. As a journalist in Houston, I hope to provide more coverage to community related issues, including poverty and high incarceration rates. I want to roll up my sleeves, get in the trenches, and bring the stories that will make a difference in people’s lives.  Personally, I also plan to get involved with some of the issues near and dear to my heart.

First, on that list is providing advocacy for seniors while I’m off the clock. I don’t think we as a community or country do nearly enough for one of our most precious resources…the senior citizens.

2016 has been an amazing year and each year seems to be even better. I am praying for good health for me and my family in 2017. Choosing to eat better and working out is what we can control to make sure we are physically and mentally fit, and I am going to do my part. Last, I pray for peace. So much has happened this past year regarding politics, racism and violence. It has to stop, it has to change, and we have to have peace.

I resolve to listen and learn more, especially from people who are different from me.  Also, to relax more and let God take charge of my life, instead of me always trying to run things. Finally, to be more giving to others.

Throughout my life, I’ve leaned on scripture to help steer my course.  As we enter the New Year, I am inspired by the biblical text, “To whom much is given, much is required”. (Luke 12:48)  My resolution is to apply this as a guiding principle when I embark on the role of Texas State Representative in 2017.  I resolve to be a fighter against injustice and a courageous voice for the voiceless. I believe that servant leadership and charity starts in your own home community.  I will take my heart of service up to Austin to improve the lives of House District 146 citizens and all Texans.