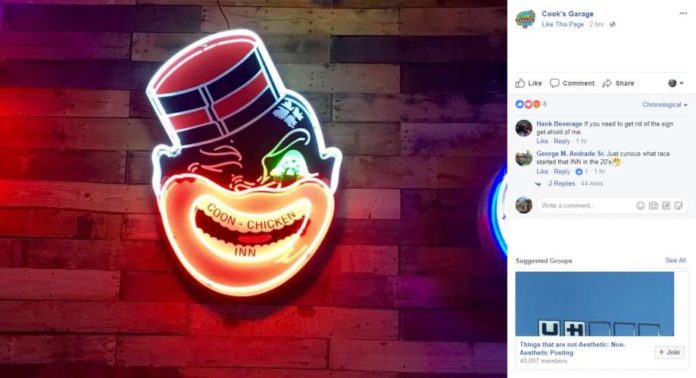 A restaurant in Texas is being called racist for using an offensive sign to decorate its wall.

The controversial sign at Cook’s Garage in Lubbock features a neon caricature of an African-American male with the words “Coon Chicken Inn” written inside its mouth.

Jessica Rios, a customer who ate at the diner, angrily shared the image on Facebook Wednesday night. The next day, the complaint reached Cook’s Garage via social media.

“We did not put this sign up to be derogatory, racist or to offend anyone,” wrote Cook’s Garage in a Facebook post. “This is part of Americana History… just like everything else hung in our collection and buildings.”

“Aunt Jemima, mammies, and lots of other black collectibles are highly sought after, as is Americana collectibles with white characters,” the post continued. “The Coon Chicken Inn was an actual restaurant started in the 20’s. Again, we want to stress we do not intend to offend anyone, and are only preserving a part of history that should remind us all of the senselessness of racial prejudice.”

The Coon Chicken Inn was a 1930s chain restaurant with locations in Salt Lake City, Seattle, and Portland. Its signature logo derived from racist blackface caricatures dating back to slavery, according to the University of Washington.

Chron.com reached out to Cook’s Garage Thursday night but was unable to contact anyone prior to publication.