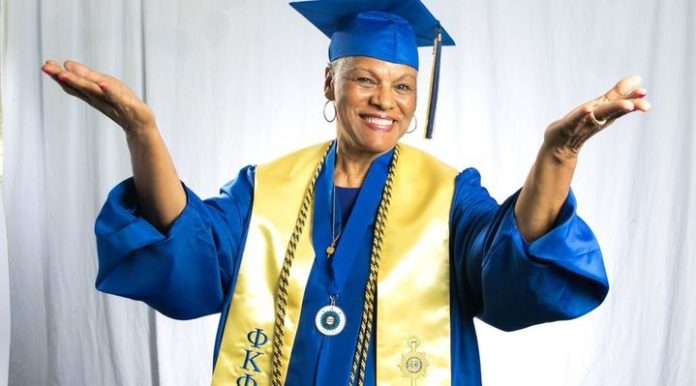 It’s never too late to go back to school.

Darlene left school nearly 55 years ago in the name of love. She was a track star at the historically black college and met her husband-to-be, John Mullins, in 1962, she told USA Today.

“I thought he was the finest thing walking on the campus,” Darlene told the HBCU’s campus magazine in 2014.

The duo knew they would marry each other the moment they met and began dating shortly after. But Darlene’s track coach noticed that she was spending most of her time with her boyfriend. Her coach gave Darlene, who was training to go to the 1964 Olympics, an ultimatum: the track team or John.

She finished her freshman year with 25 credits and married John in 1963. Her husband graduated in 1964 and began working. Darlene took care of the household and was a stay-at-home mother to their son and daughter.

The family lived in six states over the years, due to John’s successful career in business. Darlene told the campus outlet that she eventually began a career in retail and cosmetology as their children grew older. Though she remained busy, she always longed to finish school. That feeling intensified when the couple would visit the HBCU for homecomings and other celebrations.

“Something kept nagging at me,” she said. “I always told my children to make sure they finish what they started and I kind of felt it was time to live up to my own advice.”

John was very supportive when she told him she was going back to school. He told TSU that he knew the day would come when she decided to finish her degree.

“I love this woman so much and always told her whenever you are ready we will go, because this is something I knew she always wanted and I will do nothing to hold her back,” John said.

The couple moved back to Nashville in 2013 when Darlene re-enrolled. She had to adjust to the technological advances in the classroom, and took as many as 20 credit hours a semester, saying that she was determined to finish no matter how long it took.

“I feel like God has given me a second chance. Actually, I feel like I’m in heaven looking down,” she told NC5. She hopes that her story can inspire others pursuing a degree.

“My advice about education, I try to tell the kids try to do it the first time,” she said. “But if for any reason that you don’t, just keep going back, keep going back because it’s never too late.”