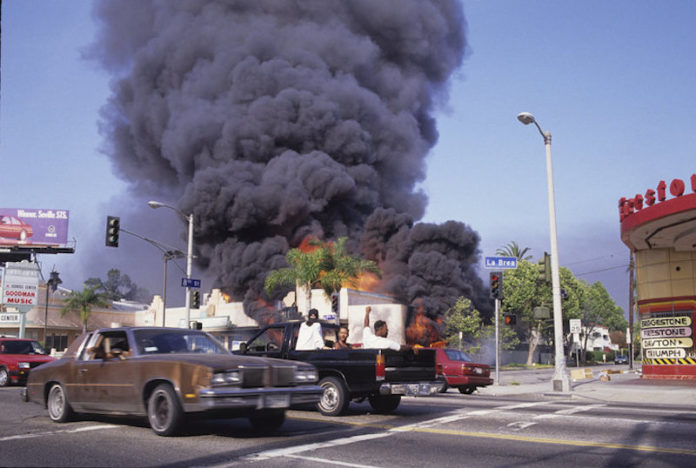 Go watch the video of Rodney King being beaten. Really watch it. You’ll see eight brutal minutes of an unarmed black man being kicked, clubbed, and tasered within an inch of his life by LAPD officers ― men sworn to protect and serve.

When the clandestinely shot video of King’s beating came out in 1991, it sent shockwaves throughout the entire country, sparking a conversation about racial bias and police brutality. The four police officers charged in the King beating were acquitted, and the city saw one of the most destructive riots in American history.

April 29th will mark the 25th anniversary of the LA riots, 25 years since a mirror was held up to the face of America and revealed a grotesque reflection. Anniversaries are about looking back. They are about legacy. But what is the legacy of the three days of carnage that ensued back then, sending much of Los Angeles into a deluge of violence, looting, and burning buildings?

In their new National Geographic documentary “LA92,” filmmakers T.J. Martin and Daniel Lindsay go in-depth to explore the legacy of the riots, forgoing the usual talking heads and experts and using only raw, unedited archival footage, leaving it up to the audience to make up their minds about the meaning of the riots.

There’s a moment in the documentary, one day into the deluge, where a Korean shop owner defiantly defends her store from a band of black and Latino looters.

The moment, is the film, and the riots themselves, in microcosm. In other words ― the riots were complicated, and messy. They weren’t just black-and-white. The underlying tensions weren’t just about the beating, but the racist justice system that allowed the cops to go free and, just a year earlier, Korean shop owner Soon Ja Du to go free in the senseless killing of Latasha Harlins.

I spoke with T.J. Martin and Dan Lindsay about what they learned about the riots in retelling this story on film ― and what America has yet to learn.

HuffPost: The film opens and closes with black-and-white footage from the Watts Riots on 1965, which juxtapose in such a stunning way with the LA Riots which took place decades later. There’s this sense of history repeating itself. Why do you think this keeps happening ― the beatings and killings of unarmed black folk, and the subsequent unrest?

Dan Lindsay: Our country has never reconciled the inherent contradictions of its founding. The people that wrote the document that said all men are created equal owned human beings. That’s just mind-blowing. As a country, we’ve never been able to reconcile that. And as long as we continue to have marginalized communities that don’t have a voice, as long as that happens, you shouldn’t be surprised if uprisings or unrest happen. It’s happened throughout all human history, throughout all of the world, from the same circumstances.

HP: The film is derived entirely from archival footage of news broadcasts, court videos, aerial footage and so on. What was the reasoning behind that, and what was the process like to organize all those hours of footage into a cohesive narrative?

T.J. Martin: We wanted to take a unique approach that would maybe inspire a unique perspective, and ultimately create a new way of thinking about these events. We didn’t want the the filter of an expert telling you what you think. It was less about deconstructing the anatomy of the events. It became much more immersive as an experience.

DL: We wanted to challenge the audience to begin thinking about these things, to have conversations, to ask the question: What do we need to do to make it so this never happens again? Because clearly we tend to have these cycles of things. We deal with it for a little bit, then everybody goes back to their lives.

HP: There are a lot of interesting moments with the media in this film, little vignettes where we see anchors right before going live, adjusting their hair and doing their makeup before launching into somber broadcasts. What do you think the role of the media was, and continues to be, in conversations about police brutality?

DL: That was a really intentional device because we had concerns that, not all of this, but a lot of this, was created by the media. The media was complicit in creating the events that led to this. We wanted to find a way to imply the idea and that was showing the getting ready. It indicates the facade of the media. It’s presentation. It’s business as usual. To us, that’s representative of America. We have this facade, this image we sell, that we don’t necessarily live up to.

HP: It’s been 25 years since the riots, and while we haven’t had anything as destructive as that happen again ― there’s a sense that it’s only a matter of time. What, to you, is the legacy of the riots?

HP: What’s stopping us from bringing this story to a close then?

T.J.: We haven’t figured out the tools of how to talk about this thing where it becomes a constructive conversation. The moment you bring up race and class, it becomes a debate. But it’s not about a debate. There are marginalized communities. This is real.

DL: But we’re trying to activate the audience’s own realization of these things, right? Near the end of the film, you see Bill Clinton watching Bush give his address after the riots, and you realize the riots were at least part of what made Clinton president. And then you think of today, when you hear phrases like “law and order,” the [fear-mongering], and then Trump becomes president. It’s our collective society’s reaction to things, these shifts.

HP: There are moments in this film that are difficult to watch ― the looting of businesses, especially Korean-American businesses. The beating of the white truck driver Reginald Denny. When we talk about riots and unrest, there’s always criticism about rioters destroying their own communities, or resorting to violence instead of peace. What would be your reaction to someone who saw this film and felt the black and Latino rioters weren’t justified in their acts?

T.J.: If anyone were to come with that type of argument, they are neglecting the visceral violence that happened to Rodney King. What we try to do, at the very least, is set context. King just happened to have a video. These atrocities, these abuses of power have been happening since the birth of the country. So by isolating members of a community (who were rightfully so angry) and dismissing 400 years of horrible treatment of one specific community…. that alone is an unfair analysis of the situation, period. We are not watching the same movie.