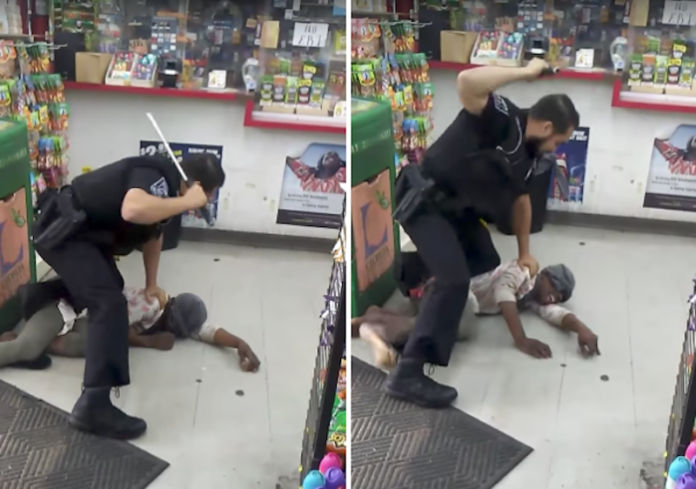 A cellphone video that shows a police officer in Georgia repeatedly striking a homeless woman with his baton has reopened an investigation into the woman’s arrest last month, authorities announced on Monday.

The nearly two-minute-long video, recorded on June 4, shows the DeKalb County officer beating the woman and threatening to shoot her as she struggles on the ground of a convenience store.

Though police reported that the woman was unarmed, she was at times seen using her legs to try to kick the officer. There’s at least one moment when she doesn’t appear to move at all before she’s repeatedly hit.

Dekalb County police spokeswoman Shiera Campbell said the renewed  investigation is in response to the video appearing on social media over the weekend.

“It’s more we’re looking at the video to see if it aligns with the officer’s statement. Right now, what he put in his report is consistent with the video,” she told HuffPost on Tuesday.

According to the police report, the officer, who is not identified, was responding to a complaint of a woman asking for money from customers inside the store. When he approached the woman, identified as 38-year-old Katie McCrary, she presented herself as a federal agent and gave a random badge number.

“Let go or I’m going to shoot you,” the officer is heard twice telling her after she grabs his baton. People standing off camera are heard telling the woman to “stop resisting.” A woman also pleads with the officer to not shoot.

At one point, the officer is seen using the stick to press the back of McCrary’s neck down to the ground.

In the arrest report, he said he delivered an “unknown amount of baton strikes to her left leg.” When she didn’t comply with his orders to put her hands behind her back, he continued to hit her legs and forearms.

“One strike inadvertently struck the side of her head as she was moving around,” he reported.

After being placed under arrest, McCrary was examined at the scene by an EMS unit before transported to the DeKalb County Jail. She was then sent to Grady Memorial Hospital for further evaluation, according to the arrest report.

The officer reported seeing a “1/2 inch laceration on her left shin and a welt on her left forearm.“

An internal investigation following the matter “found that the use of force was justified,” Campbell said.

“The officer was cleared, following the Internal Affairs investigation,” the police department said in a statement. “Now that the Department has this new evidence we have reopened the investigation and will determine whether the incident is consistent with policy and the law.”

McCrary was arrested for obstructing or hindering law enforcement officers. The Atlanta Journal-Constitution reported that she was behind bars on Monday for an unrelated prostitution charge.