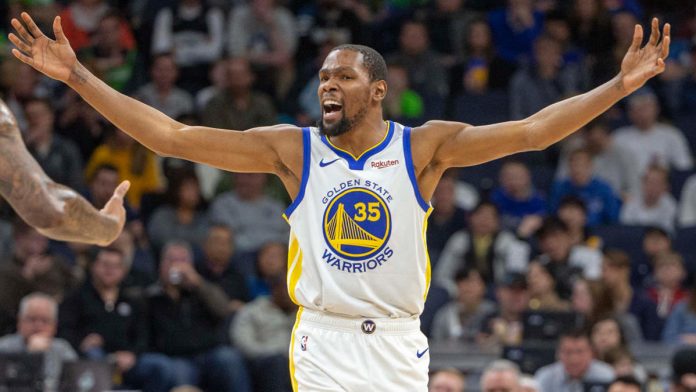 When Kevin Durant left the Oklahoma City Thunder in 2016 and joined the Golden State Warriors, he became a villain in the eyes of OKC fans, which to this day rubs him the wrong way.

Durant played in Oklahoma for nine seasons before he left to play with Steph Curry, Klay Thompsonand the rest. Right before Durant parted ways with the team, the Thunder had Golden State on the ropes during the 2016 playoffs with a 3-1 lead but lost in Game 7.

Afterward, the overall narrative from fans and the OKC media was that Durant bailed out right when it seemed the Thunder had figured out how to beat Steph Curry and crew. To a lot of folks in Oklahoma, the Warriors were the enemy, and Durant joined them because he simply couldn’t beat them.

The Maryland-raised hooper is currently injured with a ruptured Achilles tendon that he received in the Finals last year against the Toronto Raptors, and he had a lot to say about OKC, as well their fans during a new interview with the Wall Street Journal.

“People coming to my house and spray-painting on the for sale signs around my neighborhood,” explained Durant, who signed with the Brooklyn Nets in late June. “People making videos in front of my house and burning my jerseys and calling me all types of crazy names.”

Durant also talked about what it was like when he returned to Oklahoma as a Golden State Warrior to compete against the Thunder.

“Such a venomous, toxic feeling when I walked into that arena, and just the organization, trainers and equipment managers, those dudes is pissed off at me? Ain’t talking to me?” he explained. “I’m like “Yo, this is where we going with this? Because I left a team and went to play with another team?’”

“I’ll never be attached to that city again because of that,” Durant added. “I eventually wanted to come back to that city and be part of that community and organization, but I don’t trust nobody there.”

“That sh– must have been fake, what they was doing,” he continued. “The organization, the GM, I ain’t talked to none of those people, even had a nice exchange with those people since I left.”

In another part of the interview, Durant explained why he left the Warriors for the Nets and his reason was twofold. For one, he didn’t care for the “motion offense” coach Steve Kerr ran and, two, Durant felt he didn’t fully mesh with the other players.

“As time went on, I started to realize I’m just different from the rest of the guys,” he added. “It’s not a bad thing. Just my circumstances and how I came up in the league. And on top of that, the media always looked at it like KD and the Warriors. So it’s like nobody could get a full acceptance of me there.”