With the NBA All-Star Game a distant memory, the Houston Rockets are preparing for the second half of the pro basketball season. The Rockets are in a virtual dead heat with the Golden State Warriors for the best record in the NBA.

As the team heads down the home stretch toward the end of the regular season, one can’t help but be impressed with the wealth of talent the Rockets have assembled.

Immediate attention goes to the group of starters that features MVP candidate James Harden and perennial All-Star Chris Paul, but a quick scan of the bench shows a dazzling array of depth with impressive NBA resumes waiting on a nod from head coach Mike D’Antoni to enter the game.

“Coach is doing a great job facilitating minutes. When guys go down you have [other] guys who can step right in without missing a beat; that’s special. I think this team has a chance to win it all. If we keep on growing, keep working, stay humble and let [D’Antoni] guide us, the sky’s the limit.”

“I’ve never been on a team as deep as this, with this much talent,” Johnson said. “We have a lot of guys who can fill up a stat sheet and obviously do intangible things as well. As long as we stay healthy and trust one another, the sky’s the limit for us.”

Johnson revealed how previous relationships affected his decision to join the Rockets.

“Having a relationship with Mike D’Antoni, knowing [Paul], knowing [Harden], that made the decision a lot easier. Coming into this situation, they’ve been great all year. I just wanted to come in and help out as much as I could.”

It’s clear that the opportunity to win a championship is the driving force that permeates the locker room. Off-season free agent pick-up P.J. Tucker is pleased with how the team has progressed from top to bottom.

“This is what we talked about this summer when I talked to James coming in to free agency,” Tucker said. “We talked about sacrificing for each other in order to put something together and be special and that’s what we’re doing.”

With so much quality veteran experience and only one ball, the word “sacrifice” is paramount in the team psyche.

“You see the makeup of our team,” Tucker said. “We only have a couple of guys with under 10 years of experience in the league. Everybody’s been around the block.

“A lot of times when it’s not your day, you cheer for everybody else. When you look at teams that have reached that championship pinnacle you see that everybody sacrifices for each other, fights for each other. Whether it’s my night tonight or your night tonight, it doesn’t matter as a team as long as we get a W.”

D’Antoni reiterated the importance of sacrifice.

“It’s a challenge for me, but it’s more of a challenge for the players…,” he said. “They’ve got to look at the writing on the wall and go, ‘that’s it.’ It’s up to everyone to sacrifice. I’m going to do the best I can to talk to them, beg them, hug them, all that, but each player has to understand, this is about winning a championship or trying to get there,” D’Antoni said. 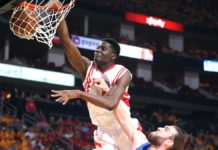 Rockets Clint Capela proving himself as a starter