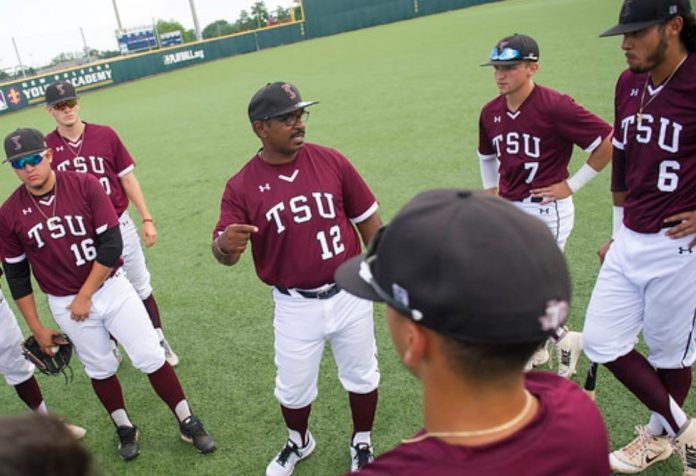 The Texas Southern University Tiger baseball team flexed their muscles at the SWAC baseball championship tournament in New Orleans. When the dust settled coach Michael Robertson’s Tigers had won their second consecutive conference championship and their third in four years.

The Tigers were a perfect 4-0 in the tournament. They opened the tourney with a convincing 10-3 smackdown of Alcorn State. They followed with an 8-4 beatdown of Jackson State. Their biggest challenge was in the semi-final game, a rematch against Jackson State. They survived a nail biter winning 10-9.

TSU made quick work of Grambling in the championship game winning 18-3.  Anine-run third inning gave TSU all they needed to be crowned king for a second consecutive year.  Christian Sanchez went 2-for-4 with five RBI, while O.J. Oloruntimilehin drove in four runs as part of a 2-for-6 day for Texas Southern (27-26). Aron Solis struck out six batters over five innings to pick up his second victory of the tournament, improving his overall season record to 10-3.

Oloruntimilehin was named the tournament MVP. In addition, TSU’s Christian Sanchez, Gaudencia Lucca and Kamren Dukes were named to the All-Tournament Team.

For TSU’s Robertson, the SWAC crown is the accomplishment of a small goal, but bigger goals have yet to be met.

“When they brought me to Texas Southern the goal was to win in the regional. They figure we could win the SWAC,” Robertson recalled. “Charles [McClelland, AD] figured that was a minor goal and you could say we’ve accomplished that, but the major goal is yet to come.”

Robertson has excelled throughout his career as a coach who could give life to dead programs, from Forrest Brook High School to Prairie View A&M University to TSU. It’s taken longer that initially planned, but in his 10th season the Tigers are the cream of the crop in SWAC baseball.

“We had situations at Forest Brook that were adverse, but we were able to get that program turned around,” Robertson said. “It was pretty much the same at Prairie View. We didn’t have a lot to work with and they were the worst team in the country before we got it turned around in year number two.”

“It actually took me six years to get things turned around at TSU.,” he said. “The situation here at TSU was probably one of the most difficult situations in all of Division I. The fact that you don’t have your own facility is the biggest challenge. Not having your own ballpark is a huge hurdle.”

Robertson and the Tigers have achieved historic success at TSU despite obstacles. They’ve appeared in four consecutive SWAC championship games, winning three of the four titles.

“That’s something that doesn’t happen very often in today’s times in the SWAC. There have only been two programs that have done it in the last 20 years. We did it at Prairie View from 2005-08 and here at TSU from 2015-18.

“It’s an accomplishment in itself to play in four straight because it speaks to the consistency that we’ve had in our program and the system we have in place. I’ve been fortunate to have good relationships, good assistant coaches and the right players in the program that fit the system.”

Next up for the Tigers is the NCAA Regional Tournament. The Tigers receive an automatic bid for winning their conference title but will have to wait a week before they know their opponent and where they’re headed.

“It’s very difficult because you know going in you’re going to play a No. 1 seed that’s probably in the top 15 nationally,” Robertson said. “The key for us is we’re battle-tested. We play a very tough schedule, probably the toughest in the conference.

“Our RPI (rating percentage index) speaks for itself. Our schedule is really top-heavy. We played Missouri State twice (preseason top 25), Mississippi State, Texas, Baylor, Kansas and Oklahoma. We play this type of schedule to prepare our kids for May.”

Robertson reiterated that, “Our big goal is to win at regionals.” Best wishes to the Tigers with their quest.