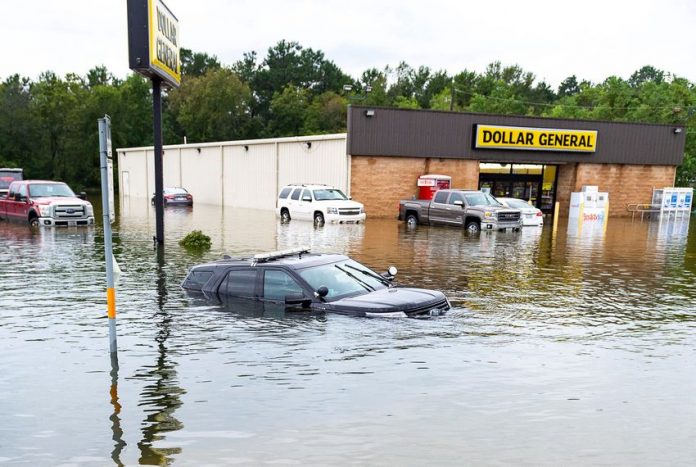 Two state officials are optimistic that southeast Texans whose homes were flooded by Tropical Storm Imelda last week will qualify for federal aid. And since it could be weeks before the destruction is fully inventoried, many leaders continue urging residents to report damage.

However, while State Rep. Dade Phelan said he was optimistic Texans would qualify for aid, the Beaumont Republican urged constituents not to hold their breath.

“False hope after a natural disaster is the worst thing you can give someone,” he told The Texas Tribune late Thursday.

The Federal Emergency Management Agency offers individual assistance for housing and other disaster-related needs once a storm is declared a federal disaster — which hasn’t happened yet for Imelda. To qualify, the storm must have flooded at least 800 homes that did not have flood insurance with at least 18 inches of water.

State Rep. Mayes Middleton, R-Wallisville, said he expects the affected area along the Gulf Coast of Texas to meet FEMA qualifications. His confidence was echoed by a spokesperson for Land Commissioner George P. Bush, whose office typically receives and then disperses federal disaster aid.

“From the damage [Bush] witnessed and the numbers of damaged homes being reported by local officials, he believes the threshold will be met,” said Brittany Eck, a communications director in the Texas General Land Office. “However, FEMA officials are currently assessing the damage, and we are being told it could be up to two weeks before they make a final tally.”

Middleton said Chambers County — which includes hard-hit communities like Winnie — has received 775 damage reports as of Thursday evening, but he didn’t know how many households were uninsured.

But Phelan and state Rep. Joe Deshotel, D-Beaumont, said they were worried that so many coastal residents received flood insurance after Harvey — 373,149 individuals received FEMA assistance after that storm, and some received federal flood insurance, too — that there aren’t enough uninsured victims of Imelda to meet the federal disaster threshold.

On Thursday, Phelan said Bush’s comments after visiting the area give him a little more hope.

Imelda, which mainly hit Houston and other cities along Texas’ southeast coast, became the continental United States’ fifth-wettest tropical cyclone, according to The Weather Channel. It dropped more than 41 inches in some areas, compared with Harvey’s highest rainfall total of 60.8 inches. Still, parts of the state were inundated worse than they were two years ago.

Imelda struck many of the same areas affected by Harvey, and Phelan is concerned many coastal residents who didn’t have flood insurance before Harvey obtained it before Imelda struck.

After Hurricane Harvey, the number of flood insurance policies increased by 34% in counties impacted by Imelda, a FEMA spokesperson said in an email.

“After a federal disaster declaration, Individual Assistance can kick-start recovery, but it doesn’t make people whole. Insurance is the first line of defense in order to recover more quickly than federal disaster assistance and get survivors back into their home,” the spokesperson wrote.

Federal flood insurance covers up to $250,000 for home losses and up to $100,000 for belongings, according to the FEMA website. That’s far more money than what many uninsured households qualify for under some federal disaster assistance programs that provide awards or loans — and whether that aid will come can be uncertain, the spokesperson said.

“There is no presidential declaration needed for flood insurance,” the spokesperson wrote.

To reach the minimum threshold for disaster aid, Deshotel said he’s urging all residents to report their damage to local officials.

“To get into that window, we need people to report who didn’t flood in Harvey but did flood this time,” he said.

Tanya Debose, a community leader in Independence Heights, a Houston neighborhood that flooded during Harvey and Imelda, said many of her neighbors still don’t have flood insurance because they can’t afford it.

While she hopes the federal disaster declaration is signed, Debose said she isn’t optimistic about FEMA helping her community. After Harvey, local nonprofits and churches, not FEMA, aided the community, Debose said. FEMA approved about $1.65 billion for individual assistance and housing programs across more than 40 counties, including Harris County.

“We’ll just have to lean on local churches while we wait,” Debose said.

Phelan said that after Harvey, the amount of aid that some people qualified for was a fraction of the cost to repair their homes. He’s urging residents to take pictures of the damage and document repair costs — but also said they may want to start fixing things now rather than wait for federal aid to come through.

“Is the juice worth the squeeze when it comes to FEMA?” he said.

In Winnie, a town of 3,233 residents about 25 miles southwest of Beaumont, Tanja Ackerman said she and her brother, Dwayne Litreal, fled their home during Imelda and went to stay with friends in Baytown until the floods receded.

When they moved into the house in July, they didn’t buy flood insurance because neighbors told them the house didn’t flood during Harvey, Ackerman said.

“It’s not in any kind of flood zone,” Ackerman said. “We looked at all the maps. … There [were] no insurance claims ever made on it for flooding.”

But Imelda flooded them. The house took on up to 18 inches of water in several rooms, Ackerman said. She estimated the damage at $20,000, not including the cost of replacing appliances.

Ackerman said she has spent approximately $1,000 on cleaning supplies so far, adding that Litreal will buy insulation and drywall when he can afford it. She said she is surprised FEMA hasn’t declared a disaster yet.

“From what we’ve been watching on the news, nobody seems to have a clue what happened here,” Ackerman said. “Nobody seems to care.”